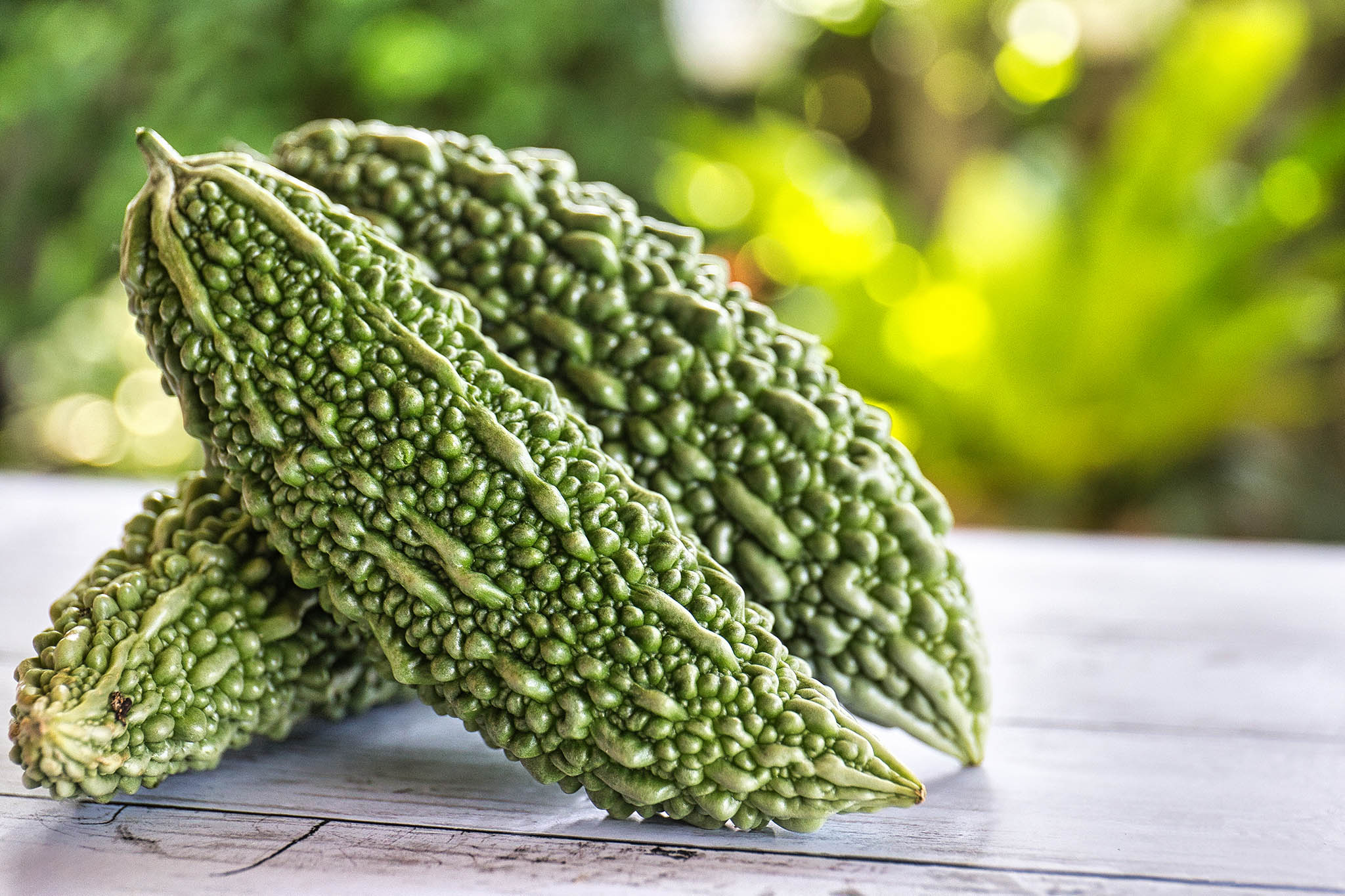 Okinawa is famed for the longevity of its people, and the islands’ nutritious vegetables help provide Okinawans with a healthy and balanced diet. Vegetables grown in Okinawa are affectionately referred to as shimayasai, a phrase commonly found on menus across the islands, meaning “island vegetables.” Okinawa’s shimayasai are rich in antioxidants and packed with minerals. You can find them at supermarkets and farmers’ markets on any island. 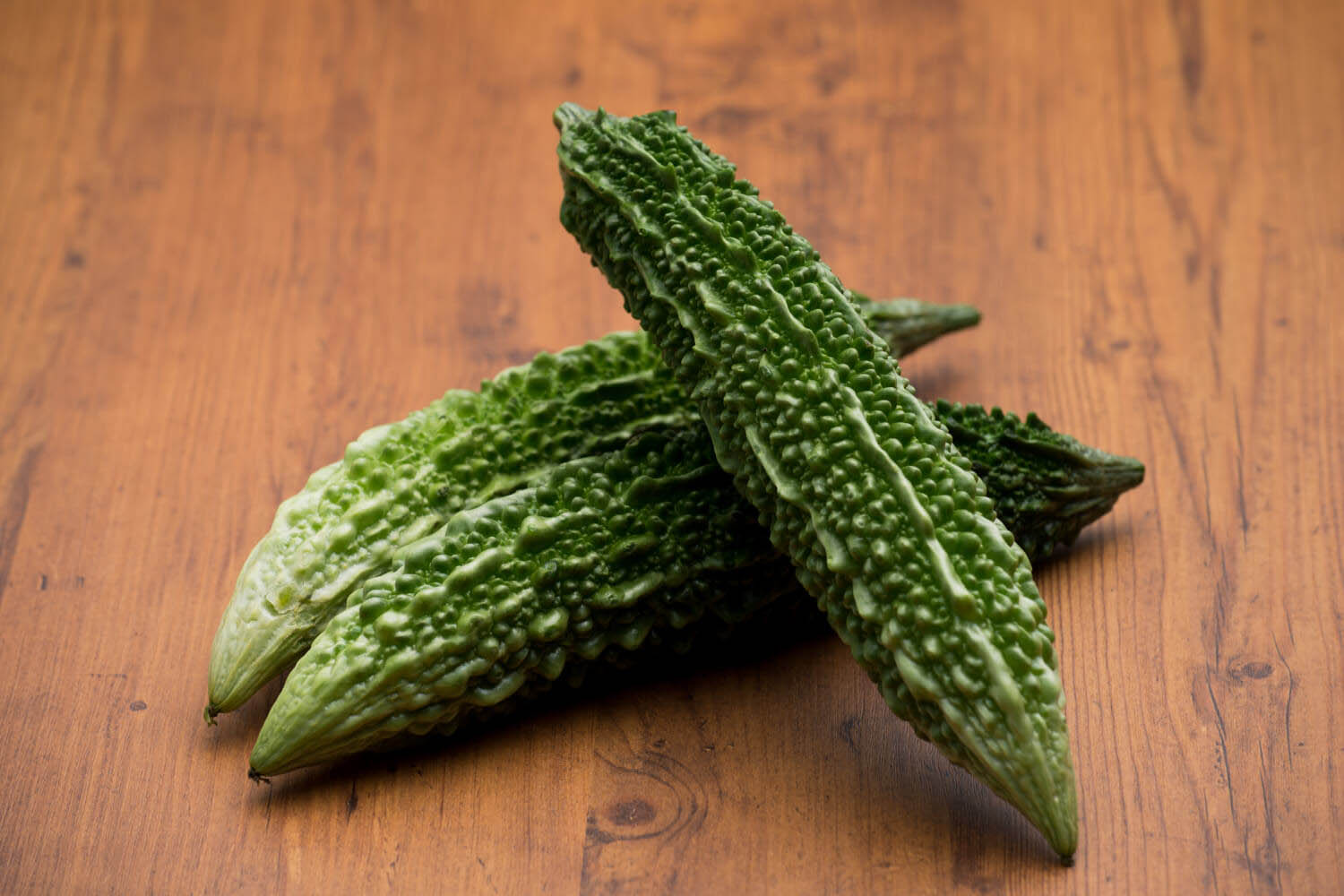 Goya (also nigauri) is the king of summer vegetables in Okinawa and is characterized by a sharp bitterness. It is found in the staple Okinawan dish goya champuru, a dish in which it is stir-fried with egg and other ingredients. Momordicin, which gives goya its bitter flavor, stimulates digestion and improves appetite. Goya are also rich in vitamin C, and retain much of their nutritional value throughout the cooking process. The vegetable is grown across the islands and harvested throughout the year, with spring and summer the peak season. 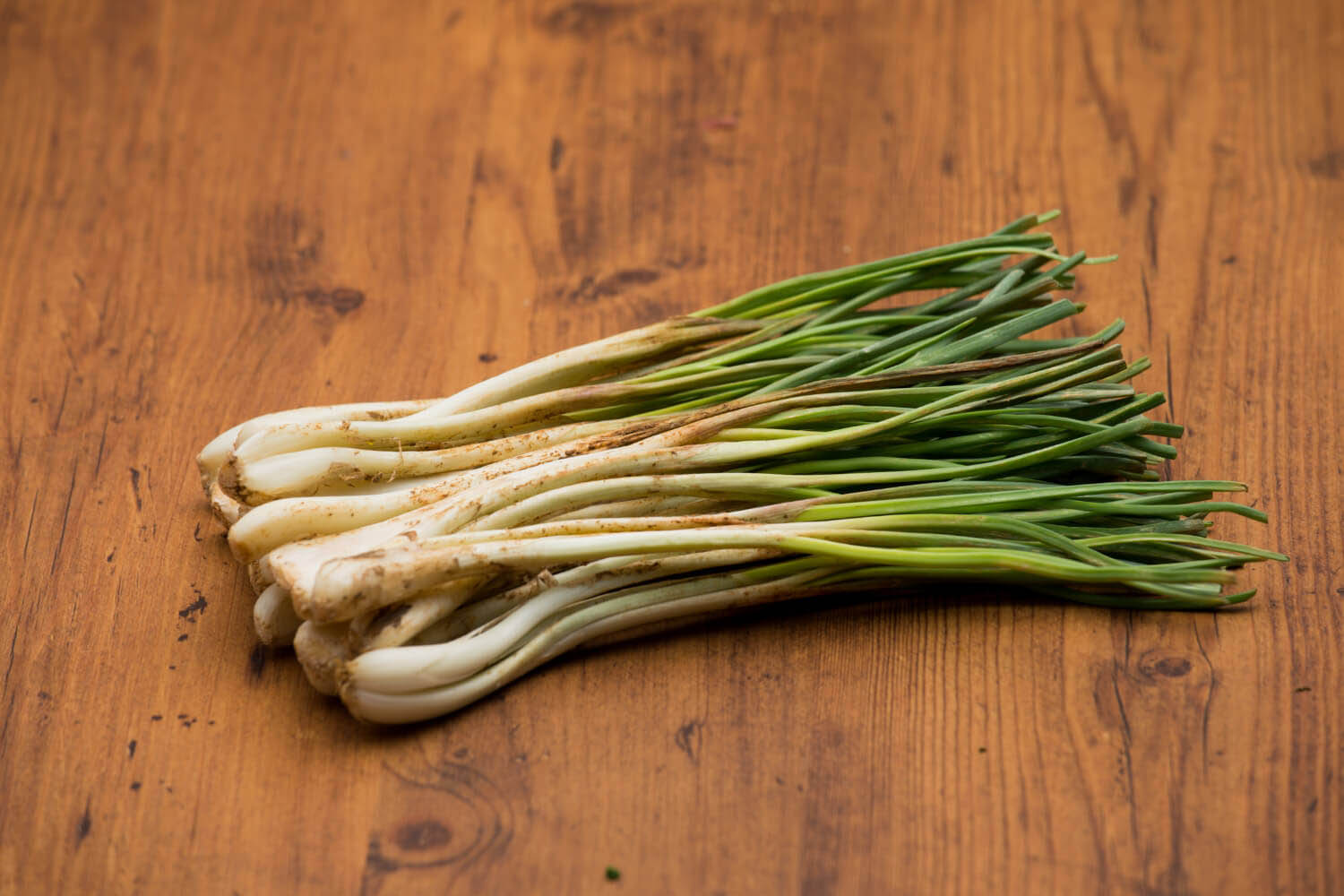 The shima rakkyo, or Okinawa shallot, has a strong onion-like smell. It is commonly pickled, served fried as tempura, or used as an ingredient in a wide range of other dishes. Shima rakkyo grown on Ie Island is considered a particular delicacy because of the island’s well-drained soil, which results in more voluminous shallots. Ie Island is a small island in the waters just off the northern part of Okinawa’s main island. 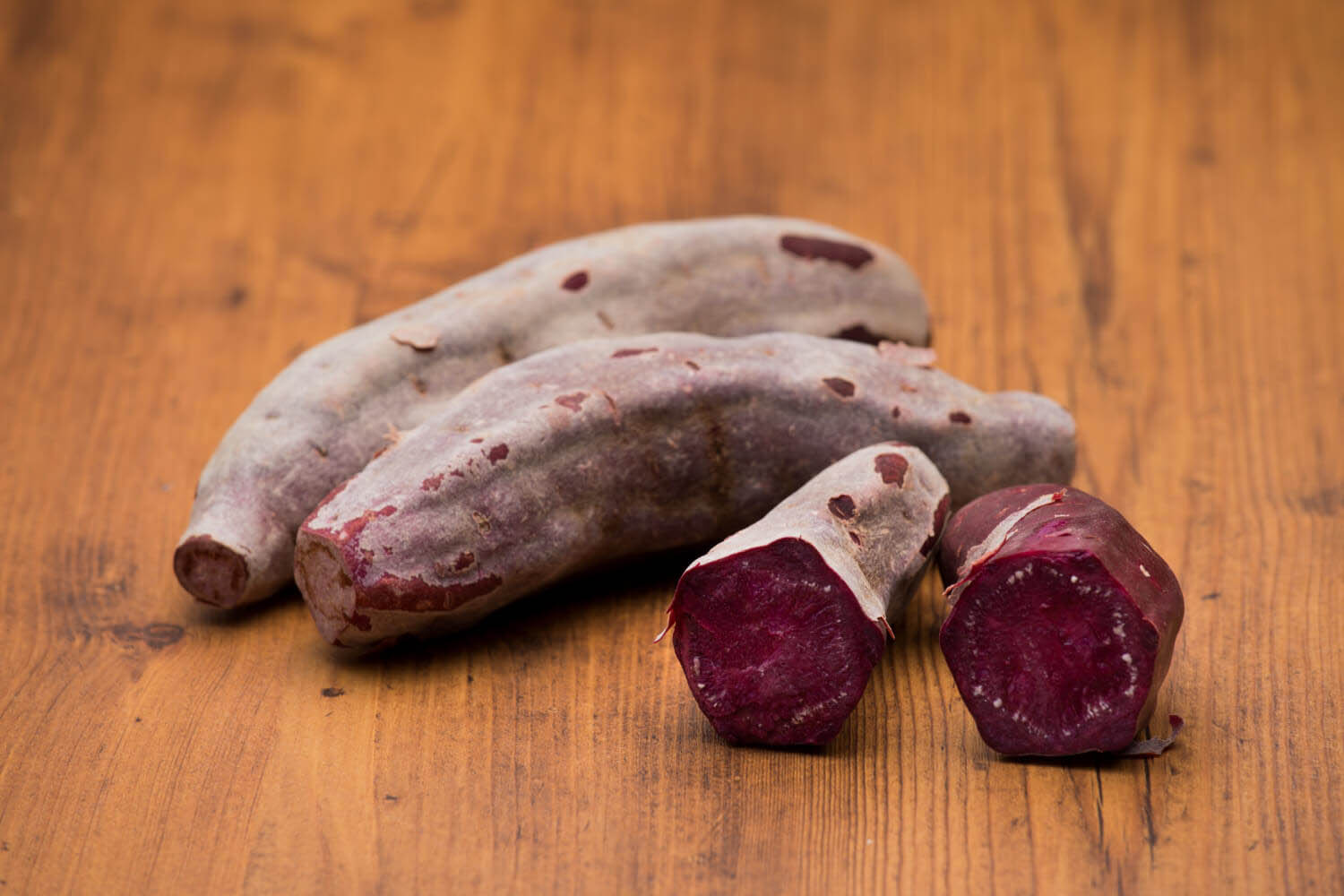 The Okinawan sweet potato (beni imo) is a type of yam with a vivid purple color, sticky texture, and refined sweetness. It is commonly eaten steamed or fried, and is also used in confectionery. The vegetable is a rich source of vitamins and minerals and contains high levels of anthocyanin, an antioxidant found in purple foods. The purple sweet potato is best enjoyed 4 to 5 days after harvest. Once it is harvested, its water content decreases and its sweetness becomes even more pronounced. 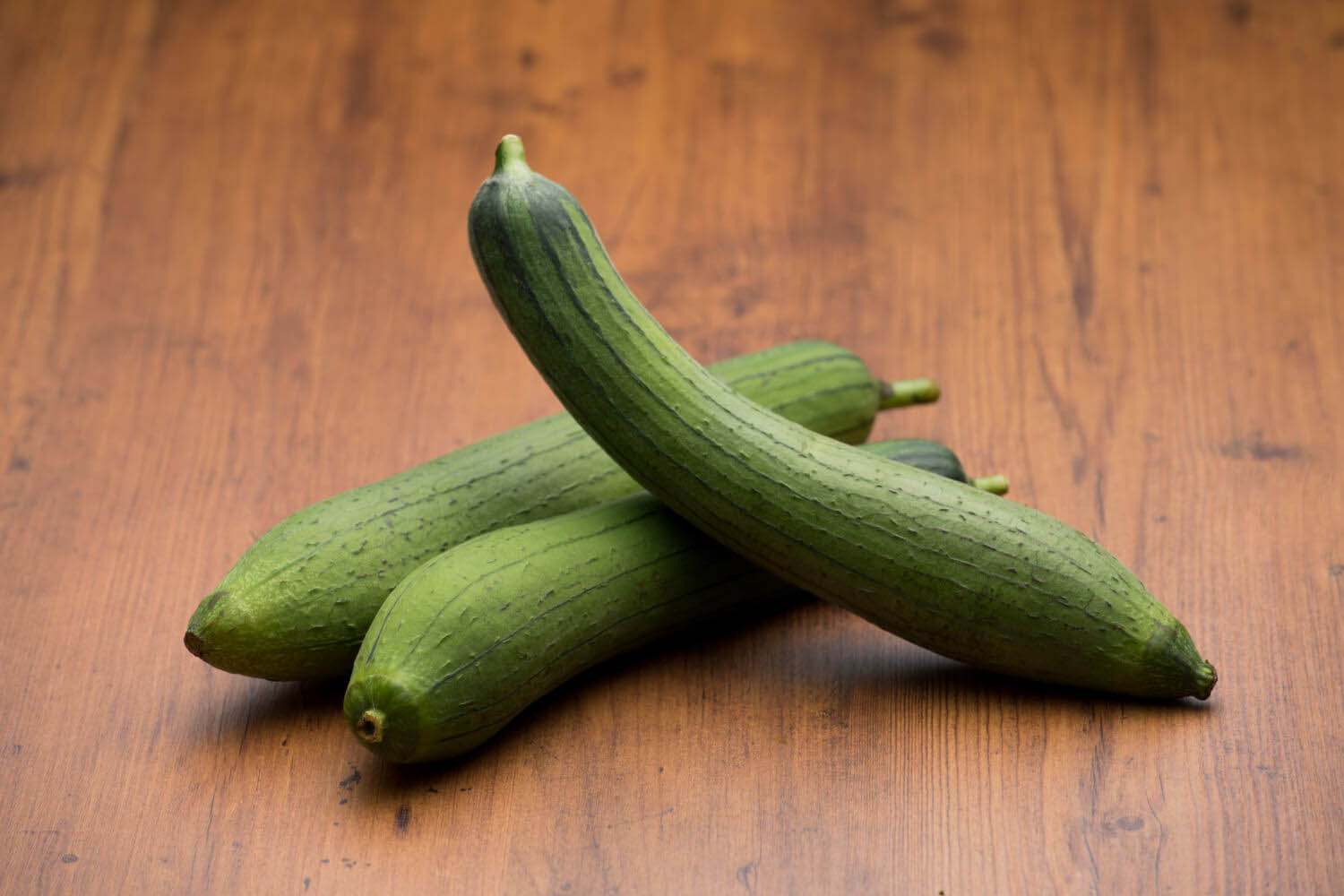 Nabera (also hechima, or sponge cucumber) is a typical Okinawan summer vegetable with a sponge-like consistency. It is commonly served simmered in miso (nabera n’bushi) and is also used in soups and stir-fries. Nabera contains potassium and carotene, and is said to have a diuretic effect. It is also used in cosmetics, such as lotions and sunburn care. 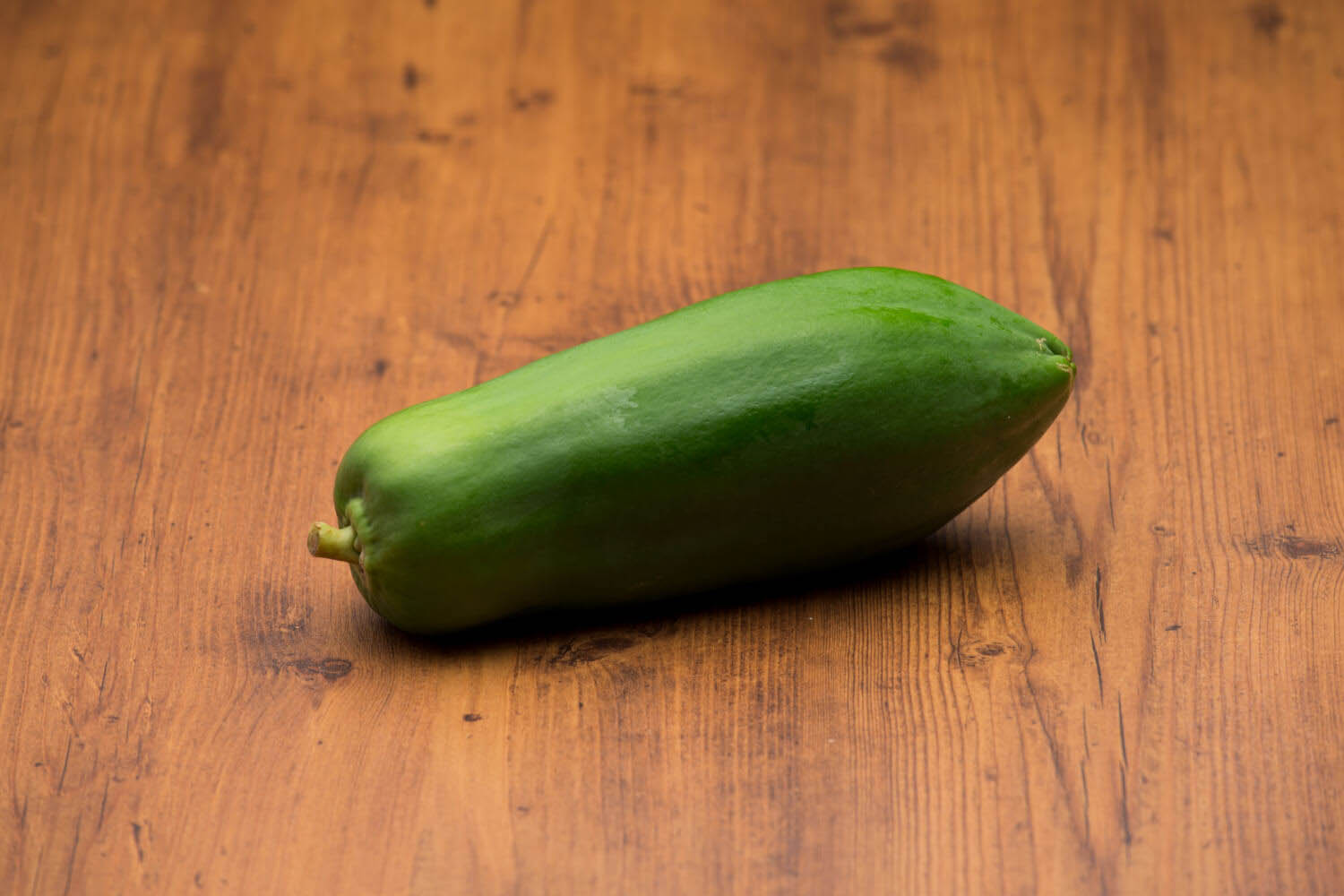 Papaya is a healthy vegetable that is rich in enzymes. It is used in a variety of Okinawan dishes, including champuru stir-fries, soups, and stews. In addition to aiding digestion, papaya is said to be good for nursing mothers. It purportedly stimulates the production of a hormone associated with lactation. In Okinawa, papaya has long been considered a remedy to help women recover from childbirth. 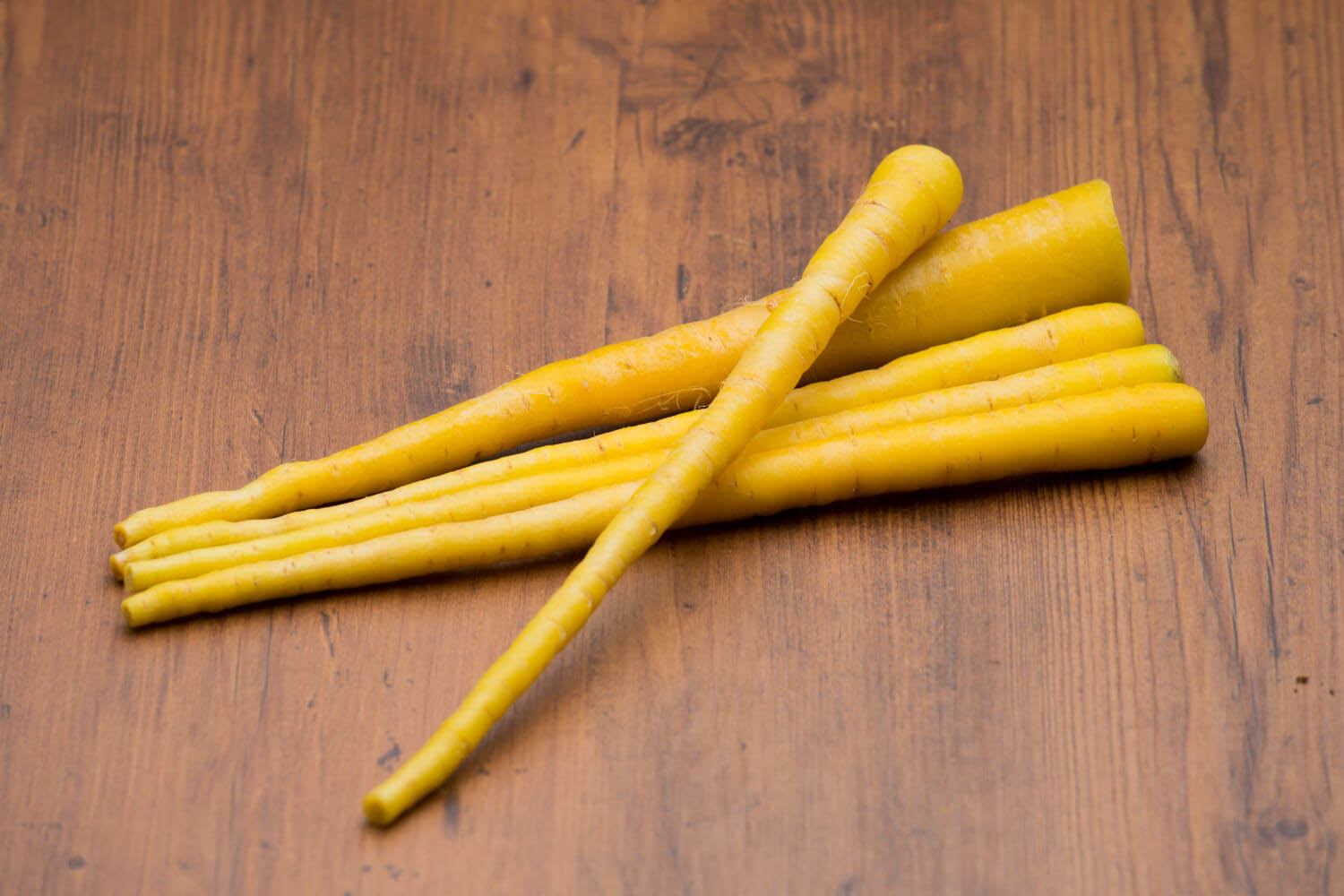 Okinawan carrots, or chidekuni meaning “yellow radish” in Okinawan, are predominantly grown in Nakagusuku and Itoman from early November to late February. They are longer and thinner than regular carrots and are much softer and sweeter. Okinawan carrots are extremely nutritious and rich in carotene and pectin. 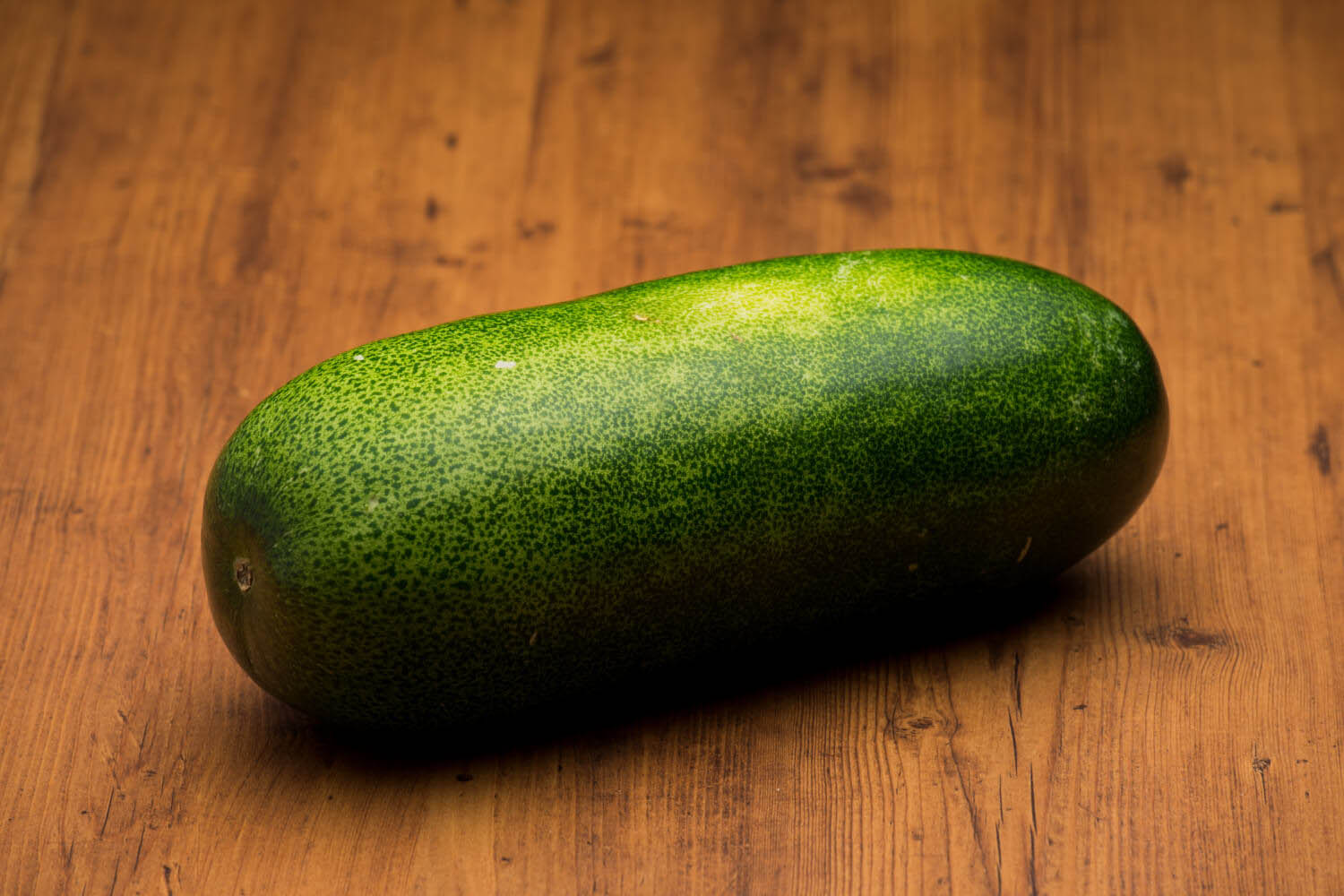 Shibui, or winter melon heralds summer but can be preserved until winter. It has a high water content and a refreshing flavor, making it a popular summertime vegetable as well as a winter staple. It is a good accompaniment to meat and fish, and is also commonly served in soups and stews. Shibui is rich in vitamin C, has a low calorie count, and is used in Chinese medicine as a digestive aid. It is mainly grown in the southern part of the main island, and peak harvest time is between April and June. 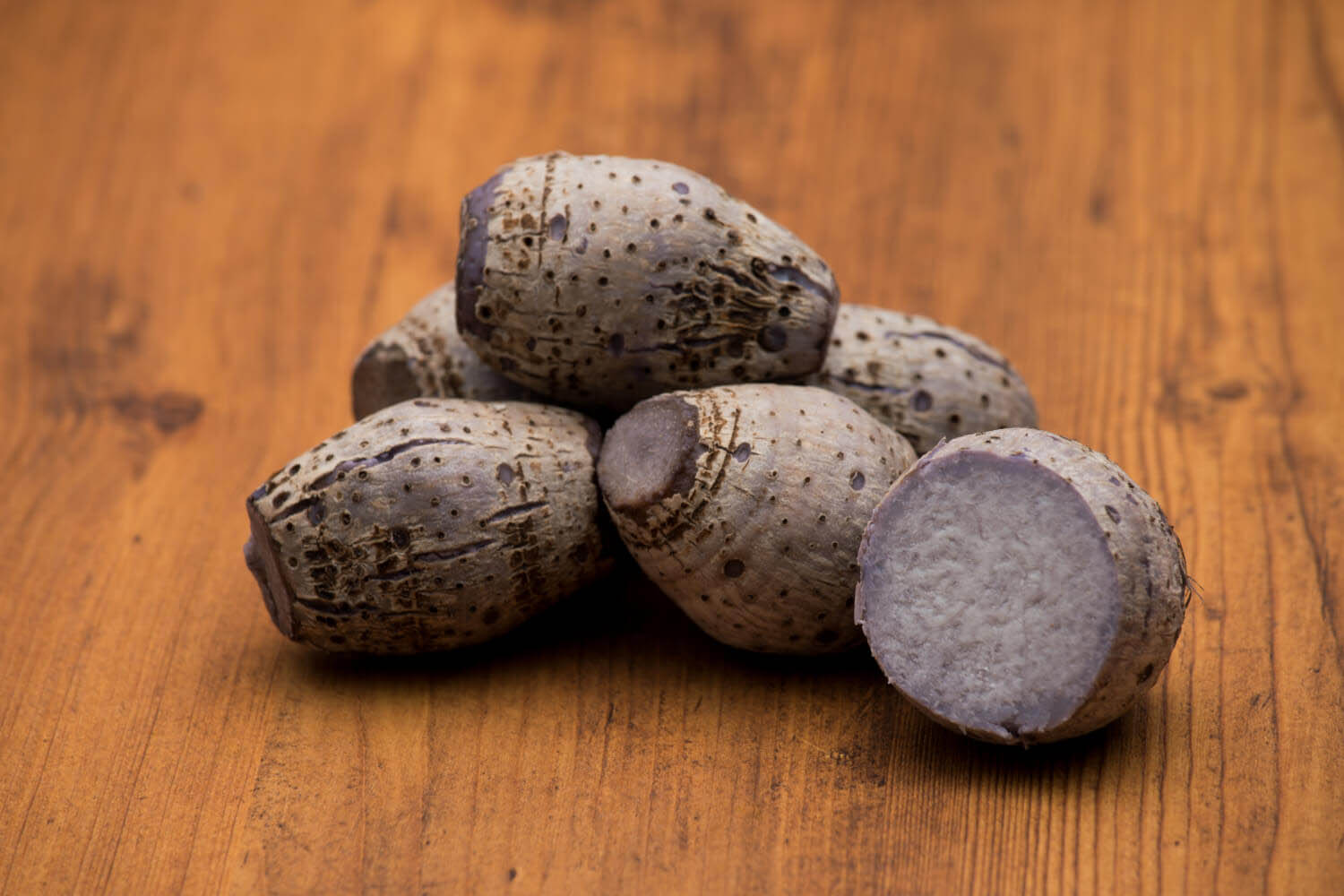 Taro is rich in starch and contains potassium, calcium, iron and vitamins. It is predominantly grown on the main island in Ginowan and Kin. Taro goes bad quickly if left uncooked, so it is generally steamed before being sold. The season for taro runs from December through April. 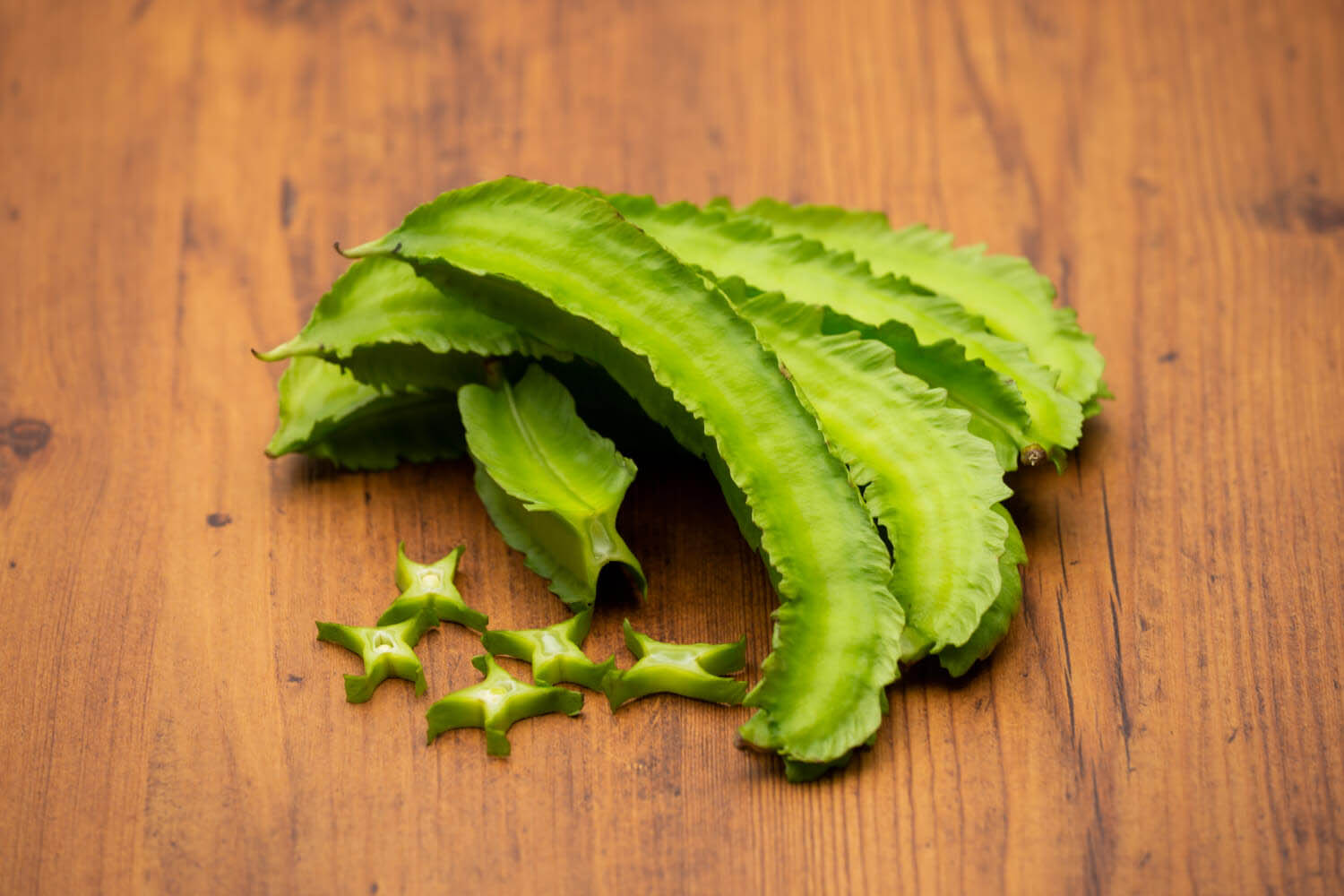 The winged bean, or four-angled bean, is full of vitamins and minerals, and usually harvested while young and soft. The pod is edible as well as the leaves, flowers, stem, and seeds. The bean is a vivid green color and has four rough-edged wings that run the length of the pod. You can find the winged bean served as tempura or stir-fried in champuru dishes. 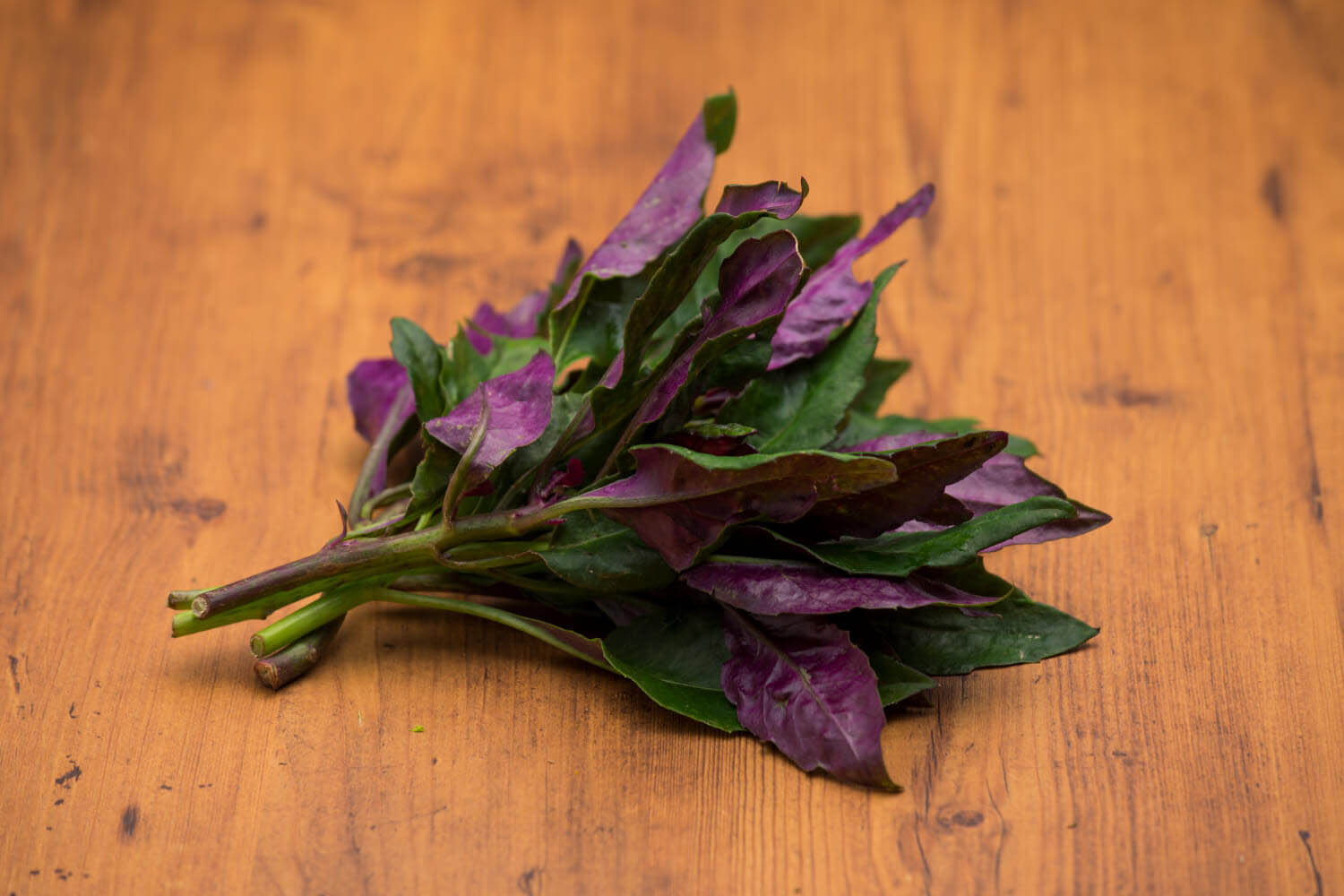 Handama is a vegetable that has been grown in Okinawa for centuries. It is harvested from winter to early summer and can be eaten raw and used in salads or stir-fried with pork, fried as tempura, or added to miso soup. The leaves are tinged purple and high in polyphenols, vitamins, and minerals such as magnesium and iron. Handama is said to prevent anemia. Interestingly, the front and back of the leaves are different colors. 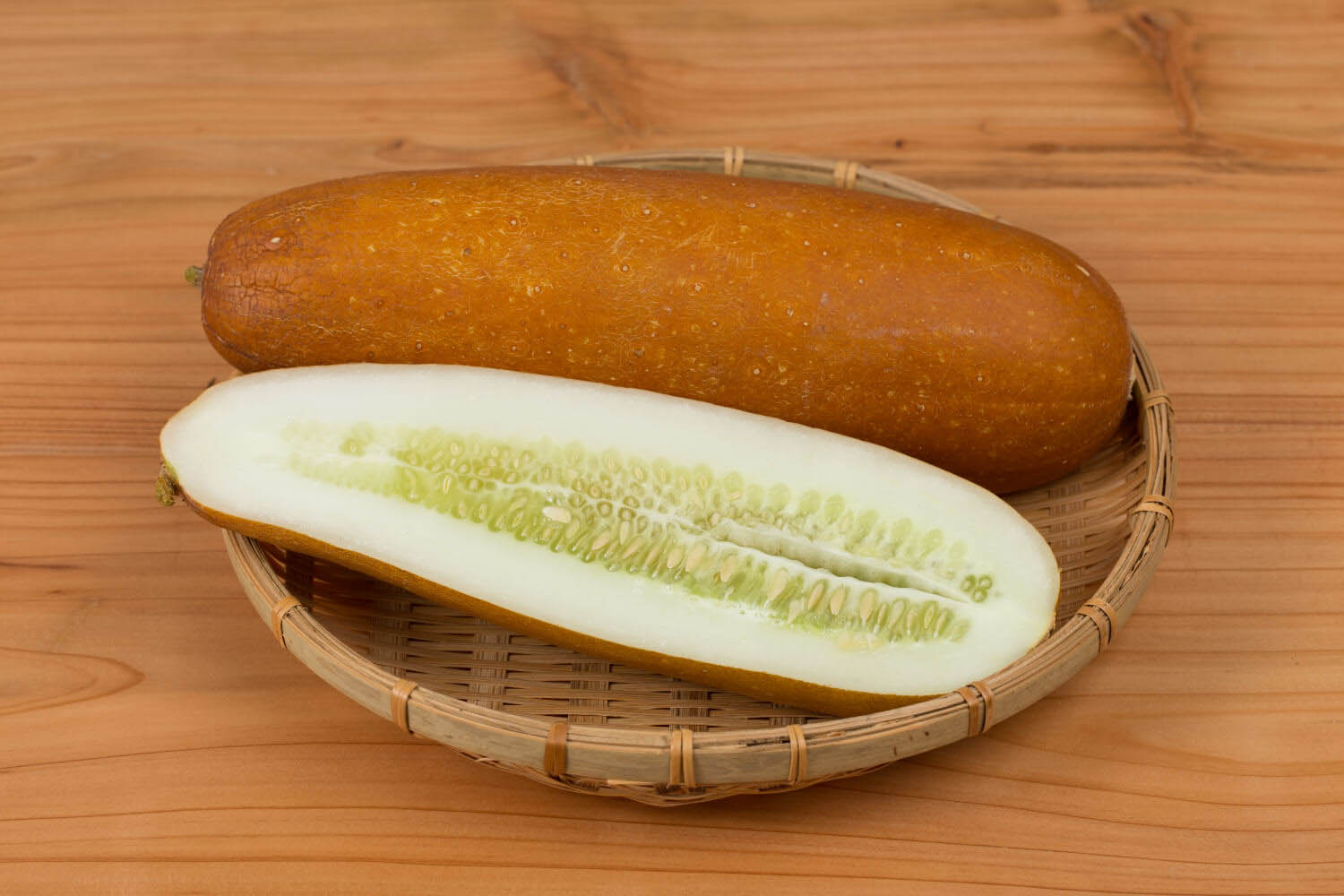 Moui is white and has a light taste similar to cucumber. In Okinawa, it is often eaten pickled or in Japanese cuisine. Moui has a high water content and contains potassium and vitamin C. Eating moui is purported to ease swelling in the body. 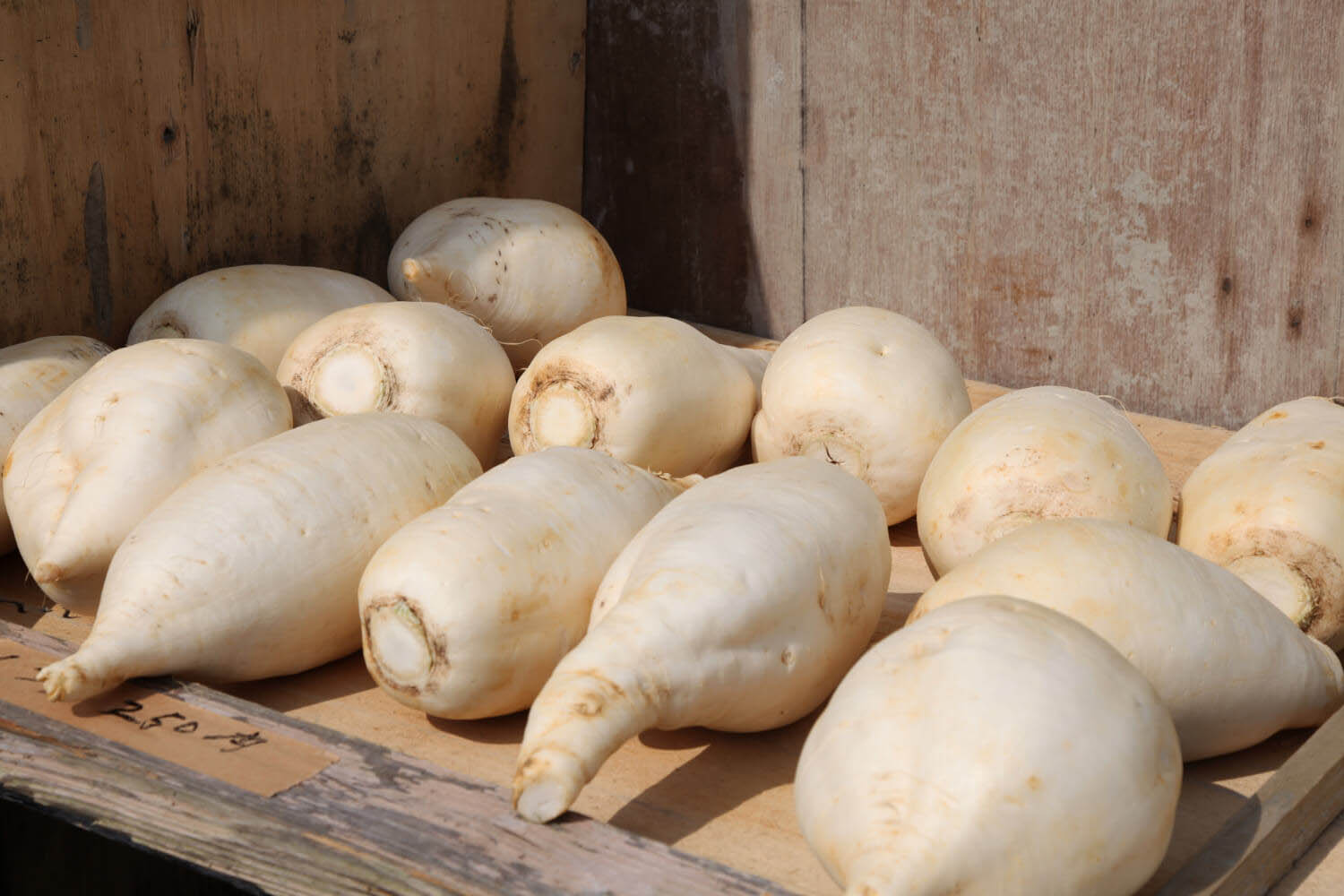 Okinawan daikon is native to Okinawa and characterized by its large size and pronounced sweetness. Even when cooked, it does not crumble or lose its shape and it absorbs flavors well. Kunigami, Ogimi and Nakagusuku are the main growing areas for Okinawan daikon. 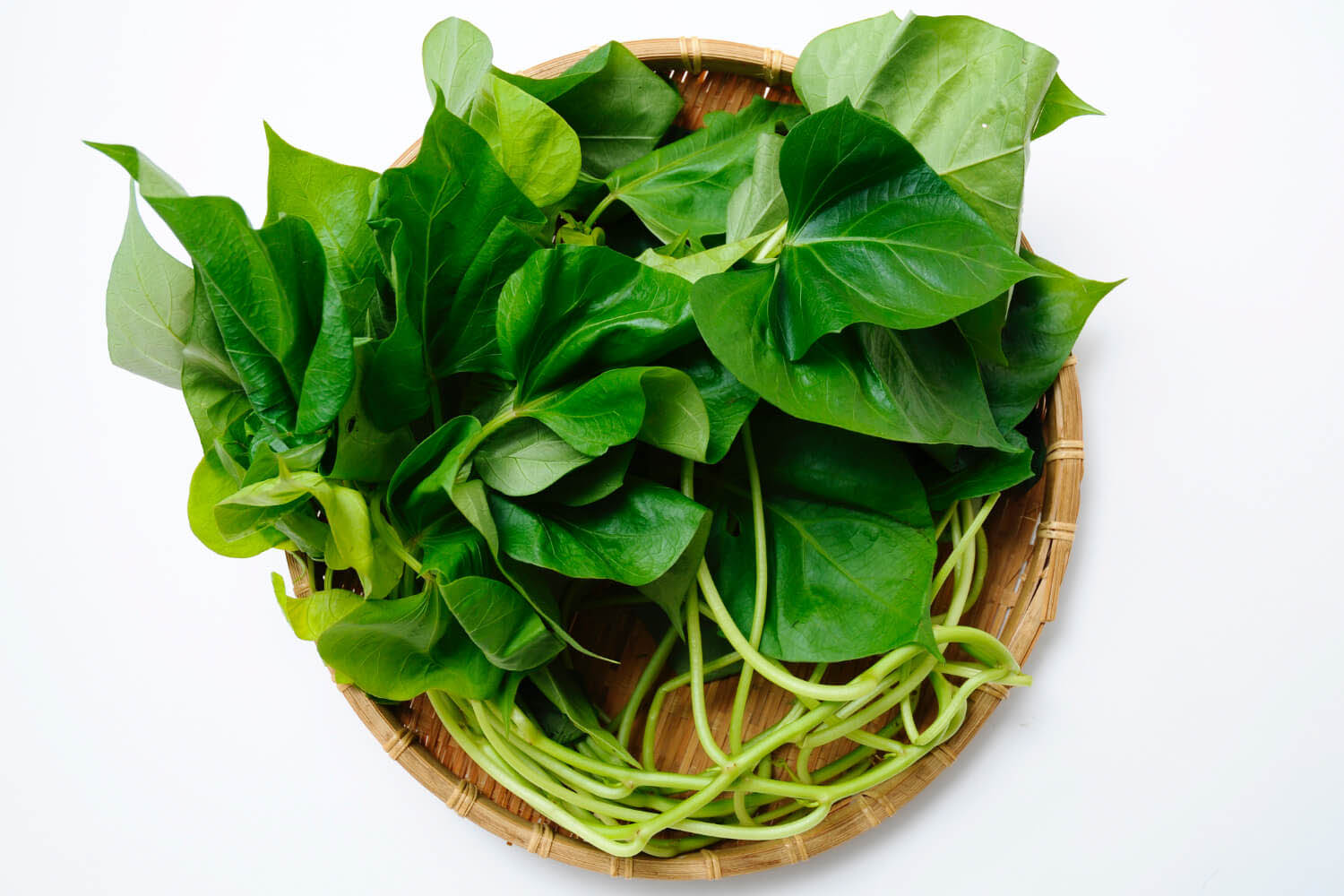 Kandaba are the leaves of the potato plant. They have been eaten in Okinawa for centuries and were an important means of sustenance when crops failed due to inclement weather including typhoons.The heart-shaped leaves have a high nutritional value and can help relieve stomach upset. Kandaba are typically used in stir-fries and salads, fried as tempura, and sometimes appear in smoothies. 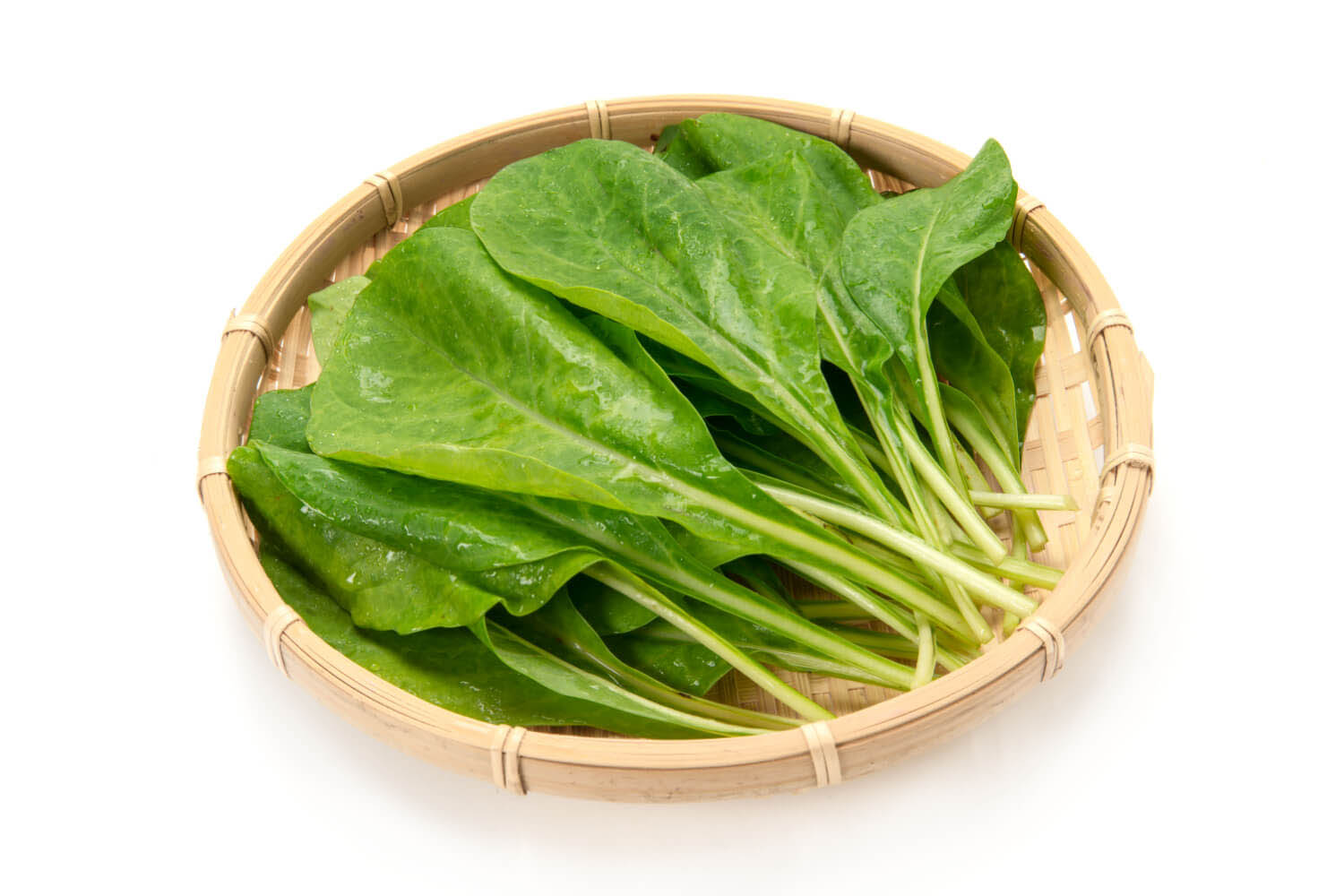 Nigana (Ixeridium dentatum) is a member of the sunflower family and has been eaten for its health benefits since the Ryukyu Kingdom era. It contains high levels of vitamin C and calcium. It is used as an ingredient in soups, fried as tempura, and often finely chopped and served with Okinawan tofu.