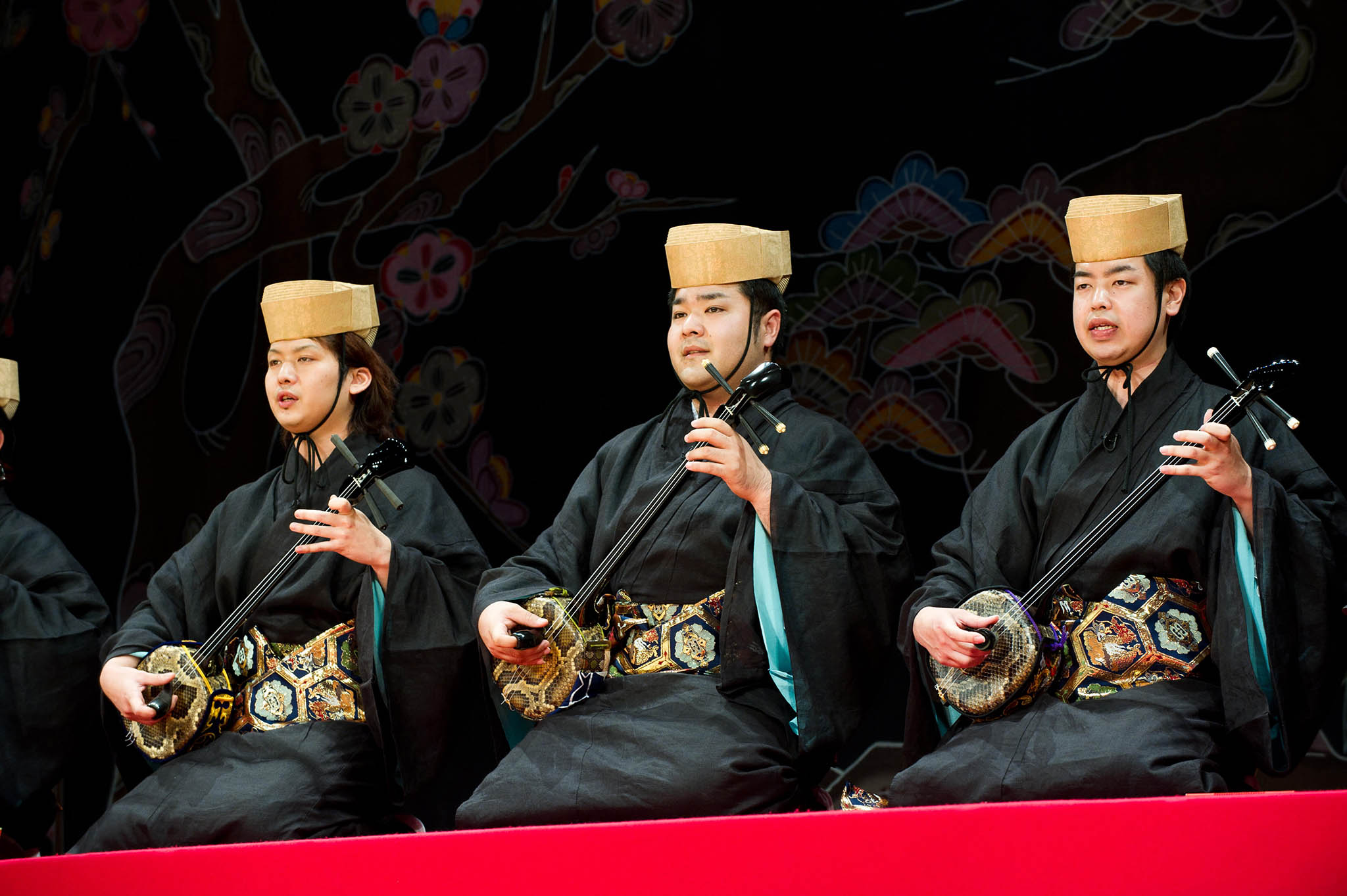 Many of Okinawa’s traditional performing arts developed with the Ryukyu Kingdom and were influenced by other cultures, through trade. Learn more about the types of dances, music, and theater that embody the identity of Okinawa’s islands. 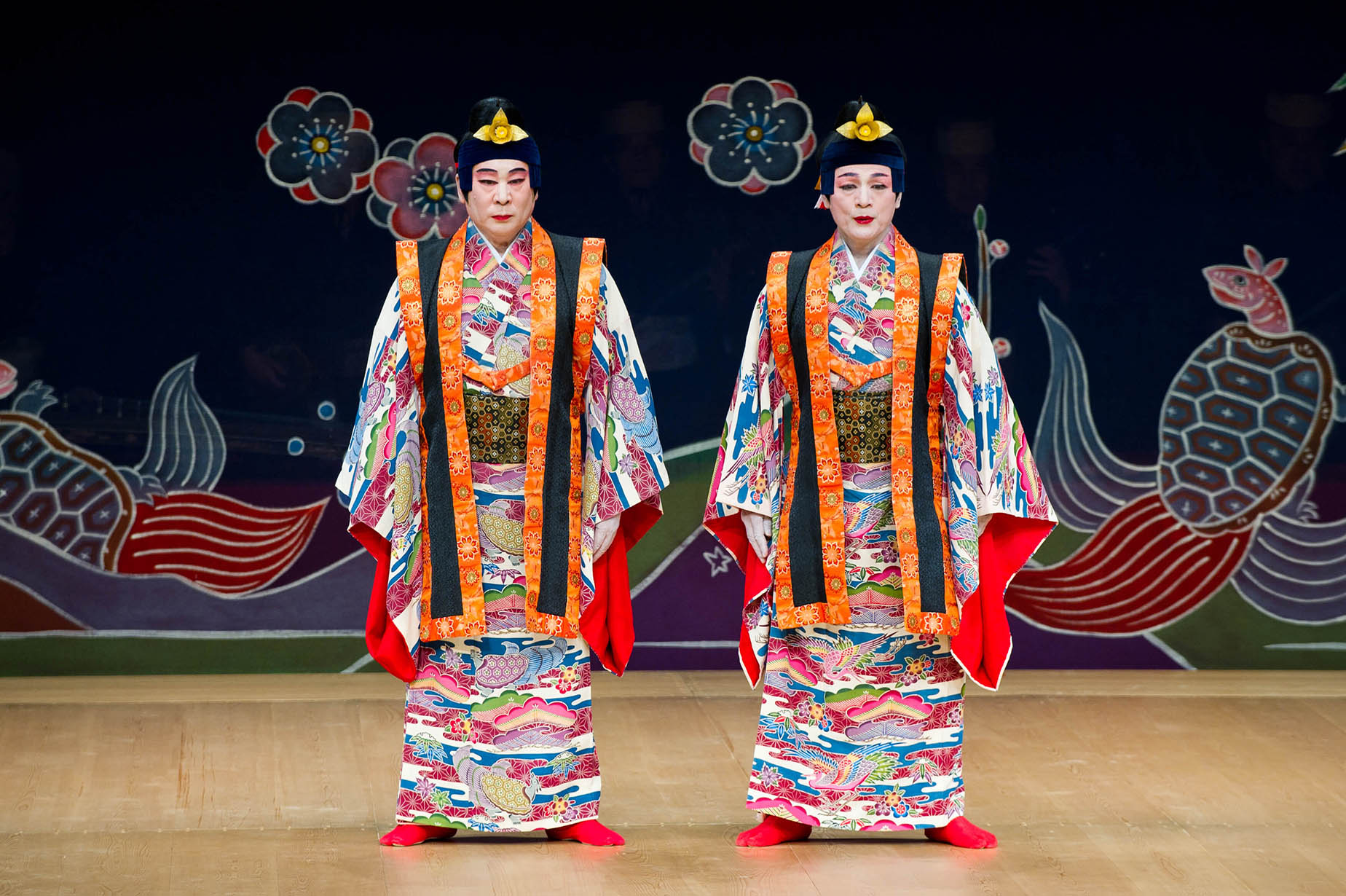 Kumiodori began in 1718, when Choukun Tamagusuku was appointed as the dance magistrate by the royal government of the Ryukyu Kingdom. He created Kumiodori by blending performing arts of both the islands and the Japanese mainland with Ryukyuan legends. The dance was originally created for entertaining Chinese envoys, and consists of three elements: spoken lines in Japanese and the language used by the royal government, classical Ryukyuan music and singing, and Ryukyuan dance. Similar to traditional Japanese performing arts such as Noh and Kyogen, it is a refined stage art originally for the upper classes. It is remarkable for the intricate details incorporated into the stage and props. 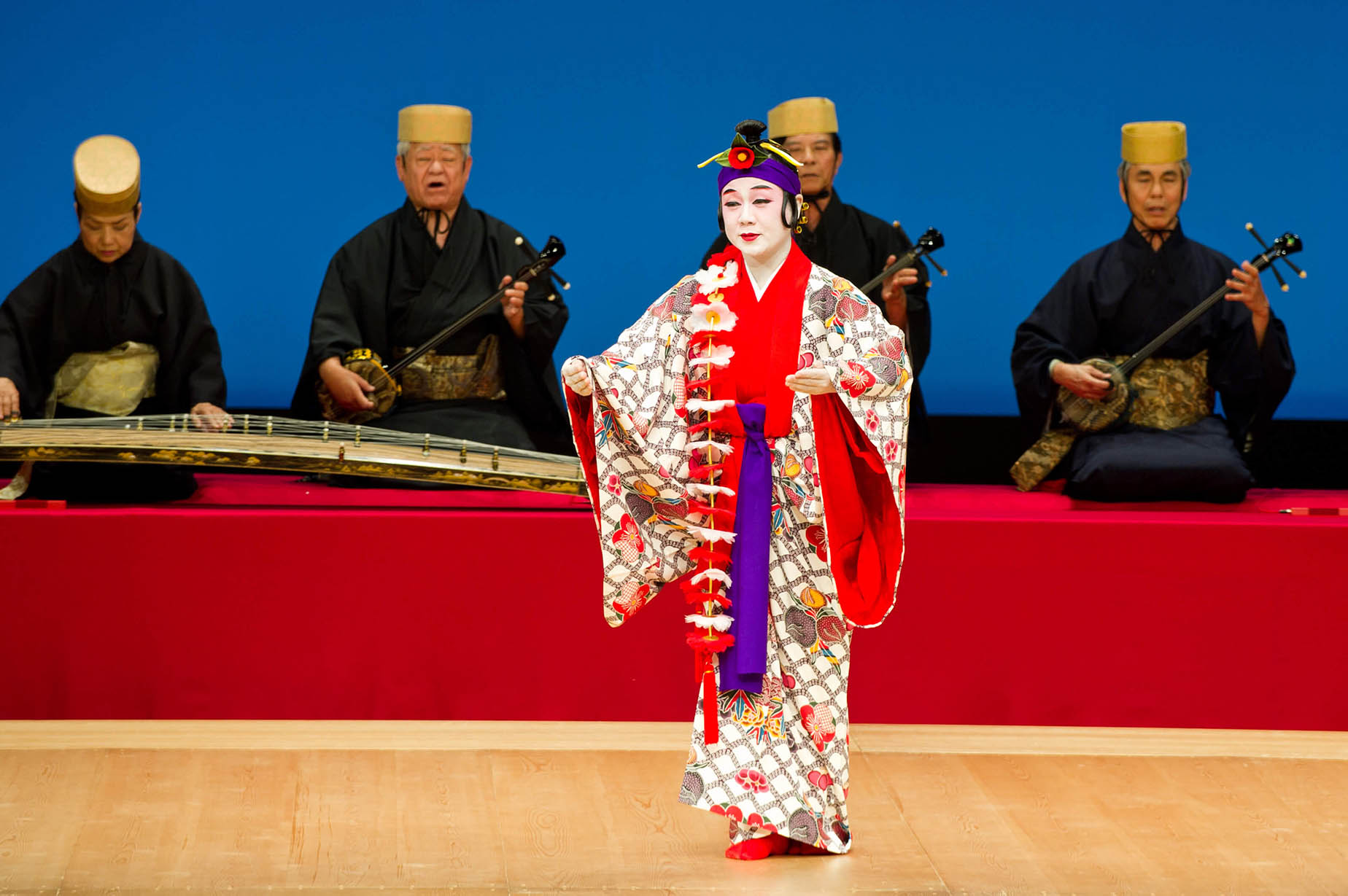 Zo dance is a performance that gained popularity after Okinawa became part of Japan, and it captures the culture and feelings of common citizens. Creative dance is the category used for modern Okinawan dance, and does not have a codified set of rules.

Music in the royal court during the Ryukyu Kingdom was primarily played on the sanshin, a traditional Okinawan instrument. It was performed at banquets to welcome Chinese envoys, and when visiting the Satsuma fiefdom and the Edo shogunate of Japan. The sanshin also features in Kumiodori and Ryukyuan dance, and has become an instrument emblematic of the Ryukyu Kingdom. Instruments such as the Japanese harp, flute, Chinese fiddle, and taiko drums typically accompany the sanshin in classical Ryukyuan music. 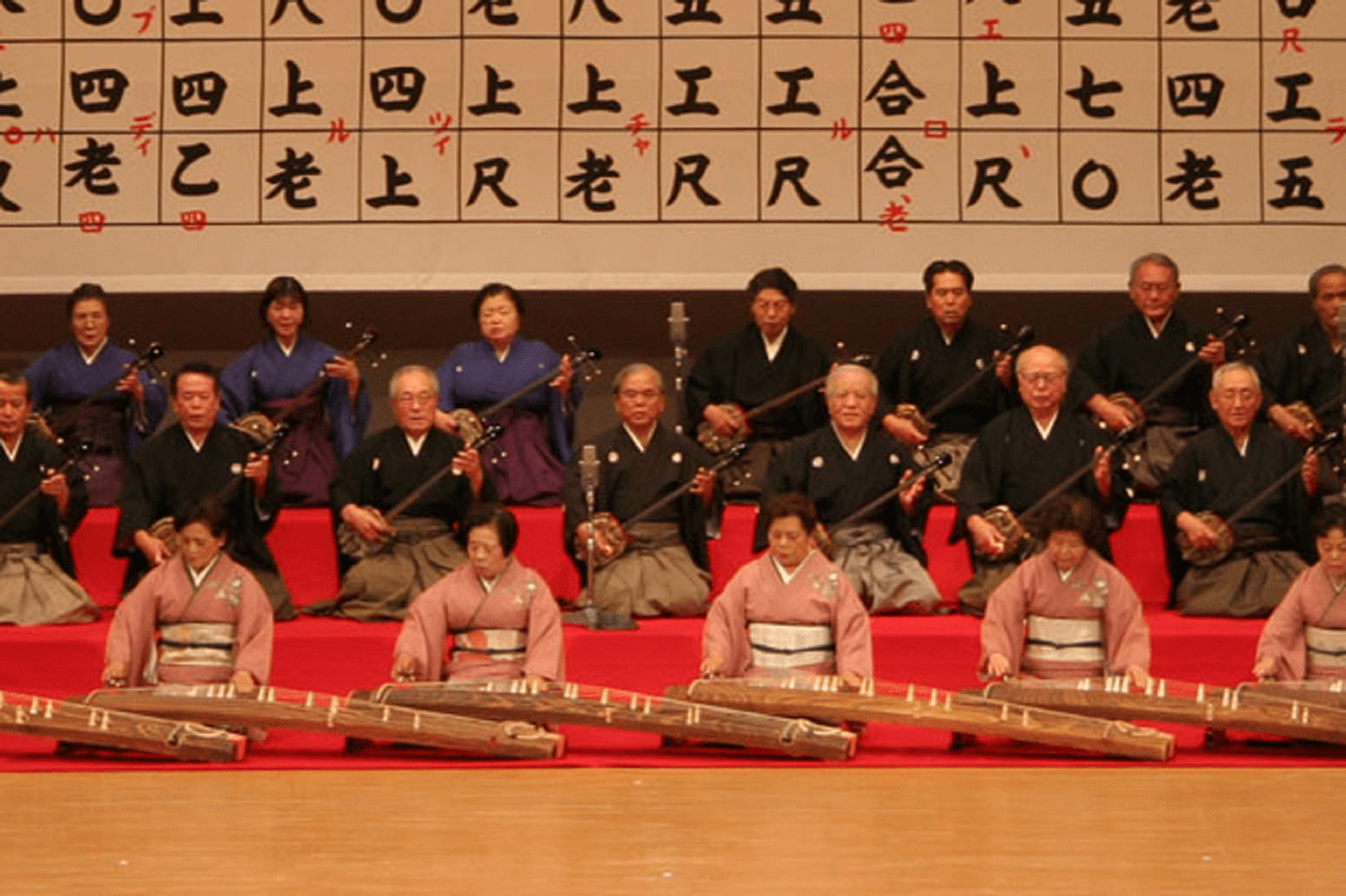 Folk songs developed from classical Ryukyuan music, and feature the sanshin heavily. The working classes penned their own lyrics and used folk songs as a way to tell stories charged with emotions. The broad appeal of the lyrics made the songs extremely popular, and many old songs continue to be sung today. The sanshin is played on a scale of do-mi-fa-sol-ti-do. The “re” and “la” of the typical Western scale of do-re-mi-fa-sol-la-ti-do are dropped to form the Ryukyu scale. 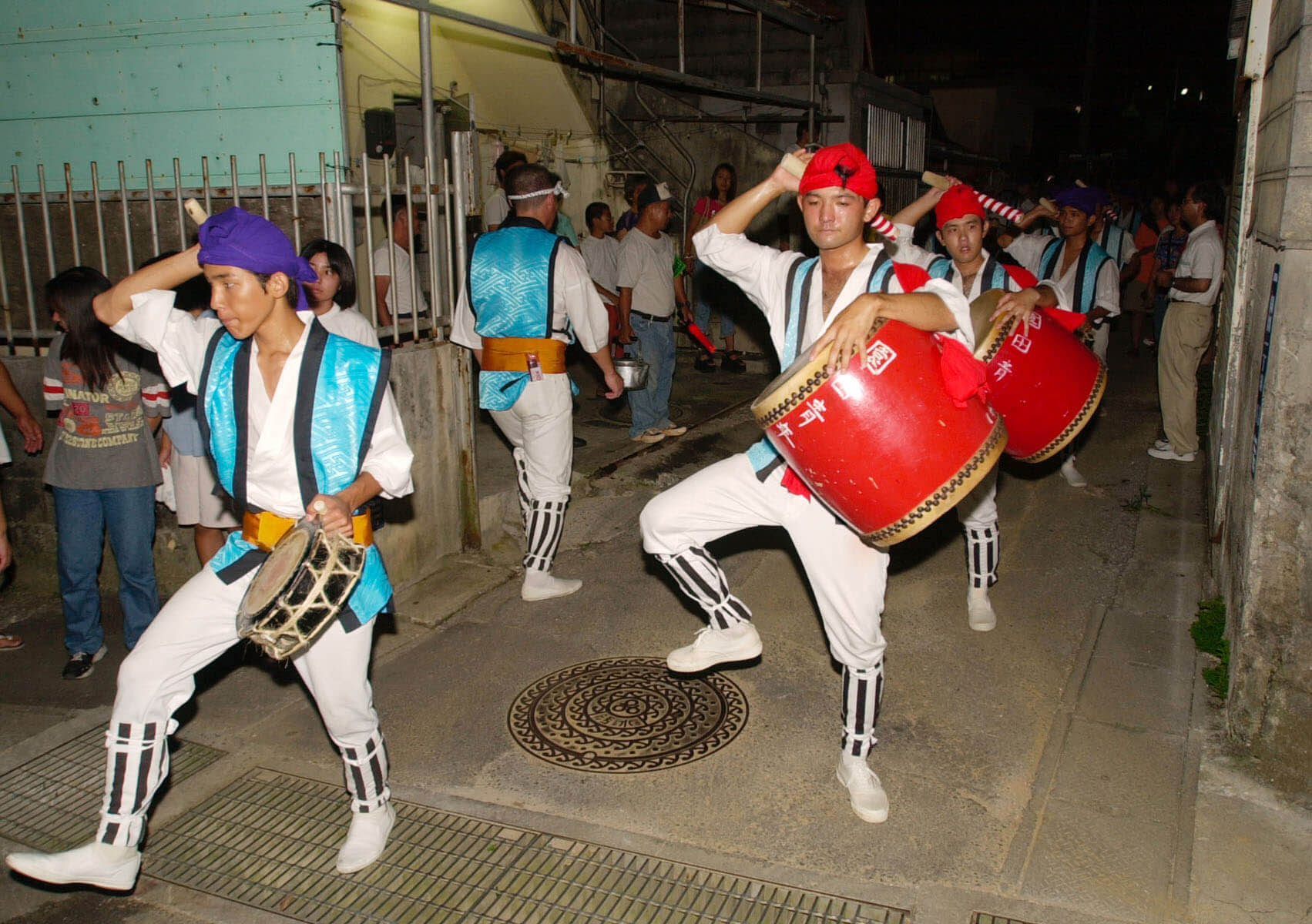 Folk entertainment originated from events that centered around the harvesting of rice, such as giving thanks for the crops, and festivals to pray for abundant harvests. These events and festivals have been passed down through generations and communities. The main forms of folk entertainment are eisa and shishimai, performances that combine costumes, music, and dance. Eisa is typically performed during the Obon festival, a holiday where families honor their ancestors. In Okinawa, it is held from July 13–15 of the lunisolar calendar (which typically falls around late August on the solar calendar)

Okinawan plays, known as uchina shibai, are believed to have originated in 1879, around the time the Meiji government abolished feudal domains and established Japan’s prefectures. These consisted of opera, which combined the lyrics of folk songs with classical music and dance. Many plays are based on legends and historical documents. Okinawan plays depict the customs and history of the masses, and even today, they continue to be performed in theaters, covering not only classical works, but also many new compositions.