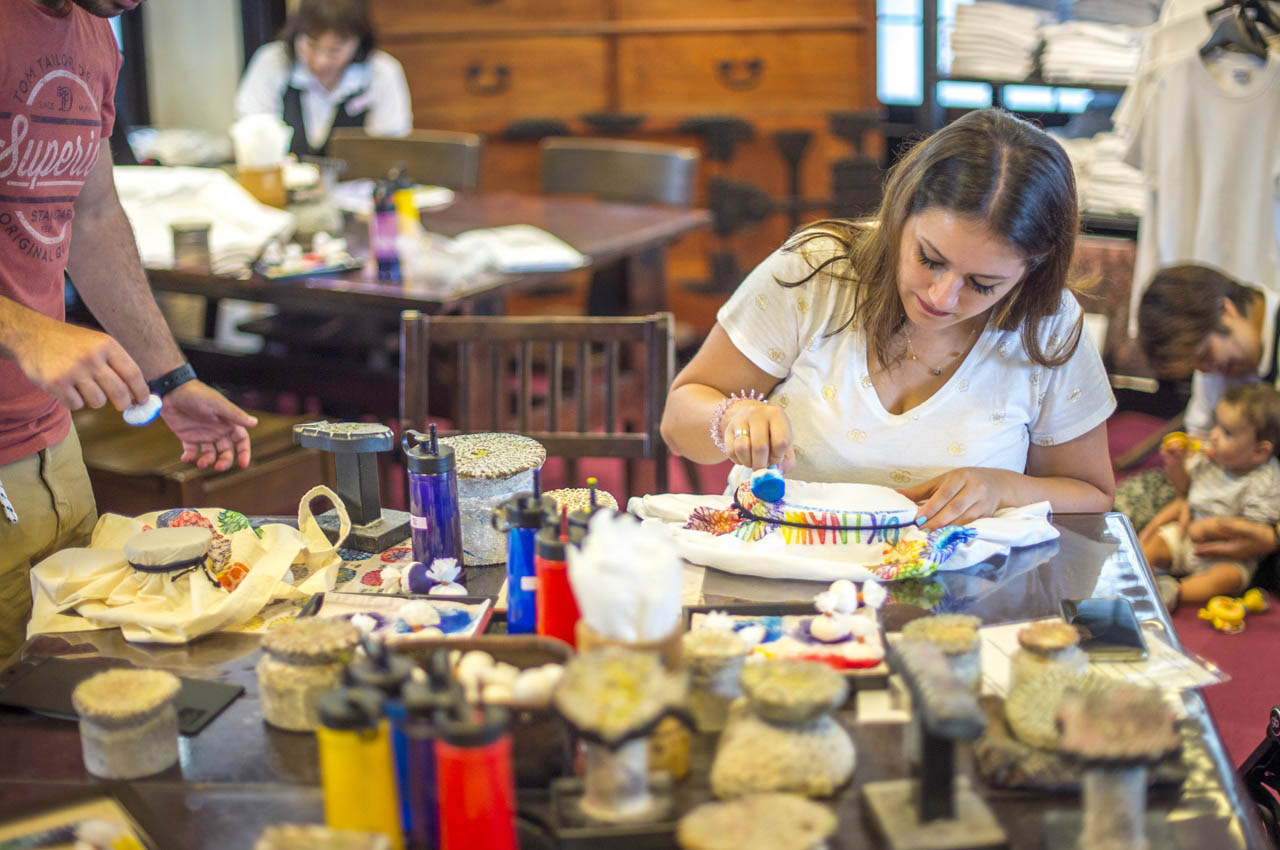 With such a breadth of cultural diversity, it can be hard to know where to start exploring in Okinawa. Browse the following 10 must-try activities for an introduction to getting hands-on with Okinawa’s traditions. 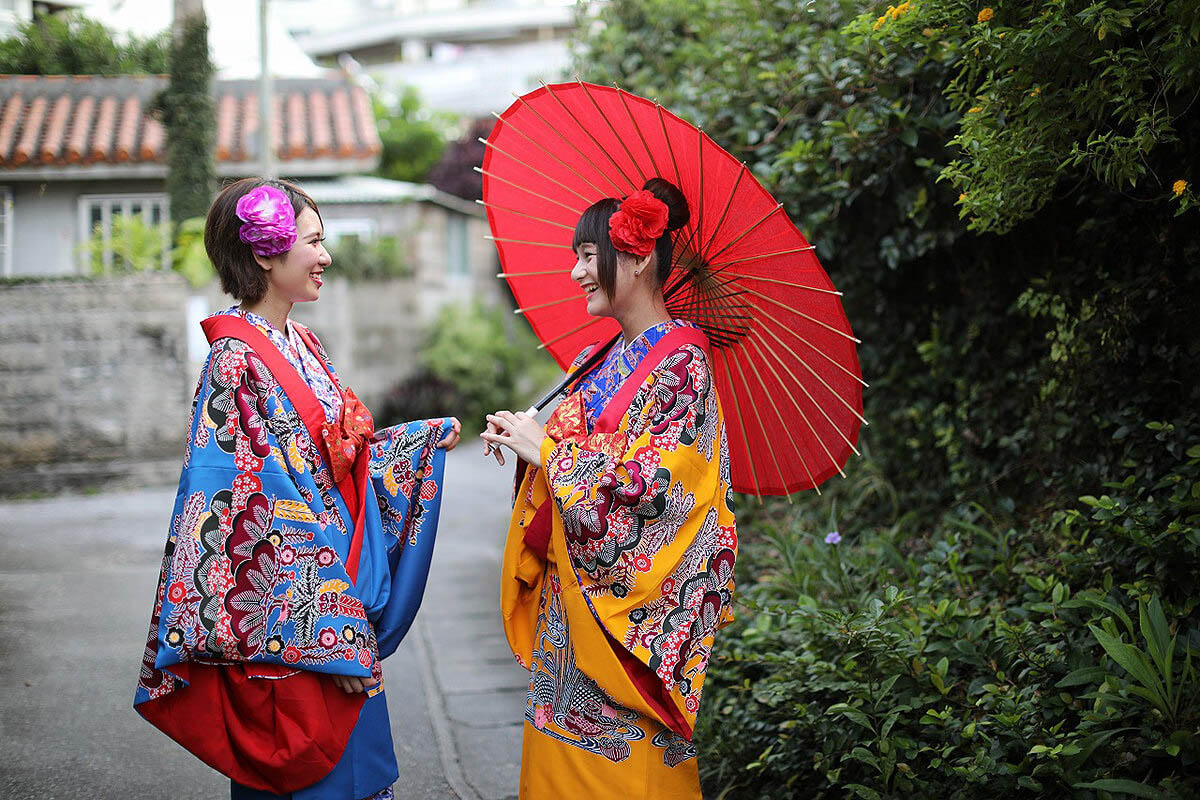 Traditional Okinawan attire is called ryuso, or uchina-sugai in Okinawan. During the Ryukyu Kingdom era, the color, pattern, and fabric of clothes marked the social status of the wearer. Hairstyles and hairpins also varied according to status. Because of the subtropical climate, Okinawans did not adopt the same clothing styles as mainland Japan. They used a thin waistband instead of a wide sash often used with a typical kimono. The cuffs are loose and the gap between the body and the garment is well ventilated, making the clothing cool to wear. The material is usually a brightly colored textile called bingata, traditionally reserved for Ryukyu royalty. A stroll around town in traditional dress is sure to make long lasting memories.

Paint one of Okinawa’s legendary guardians 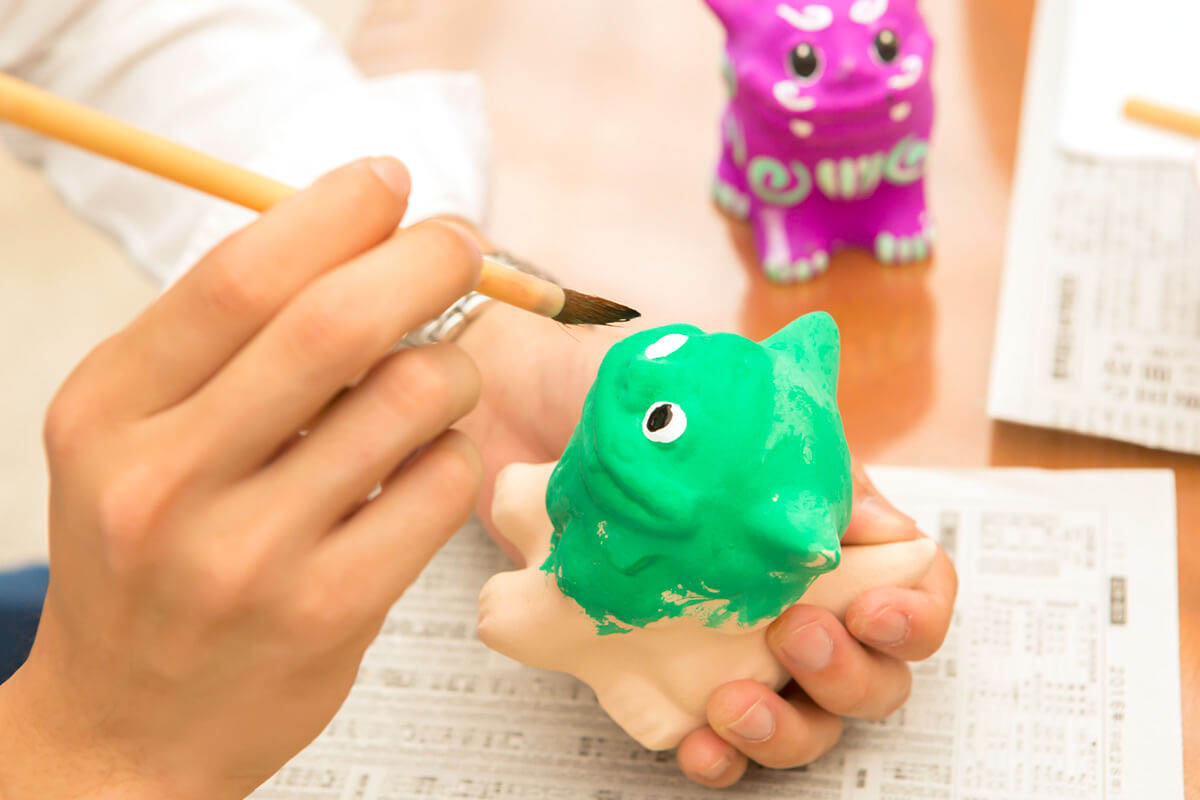 It is no exaggeration to say that shisa, which adorn rooftops and house gates everywhere, is the symbol of Okinawa. Shisa are legendary creatures sometimes referred to as “guardian lions,” and are said to drive away demons and bad luck. Shisa were introduced to Okinawa from China sometime between the 13th and 14th centuries. In addition to being on roofs or by gates, some shisa are placed at village entrances or on hills to protect the whole village or town. You can try your hand at making shisa at a traditional yachimun pottery studio. Be aware though that while making shisa is one of Okinawa’s traditional crafts, the clay takes time to dry and bake, so we recommend painting a ready-made shisa that can be done easily in one sitting. There is nothing like a handmade souvenir that you can take home with you.

Learn to play the sanshin 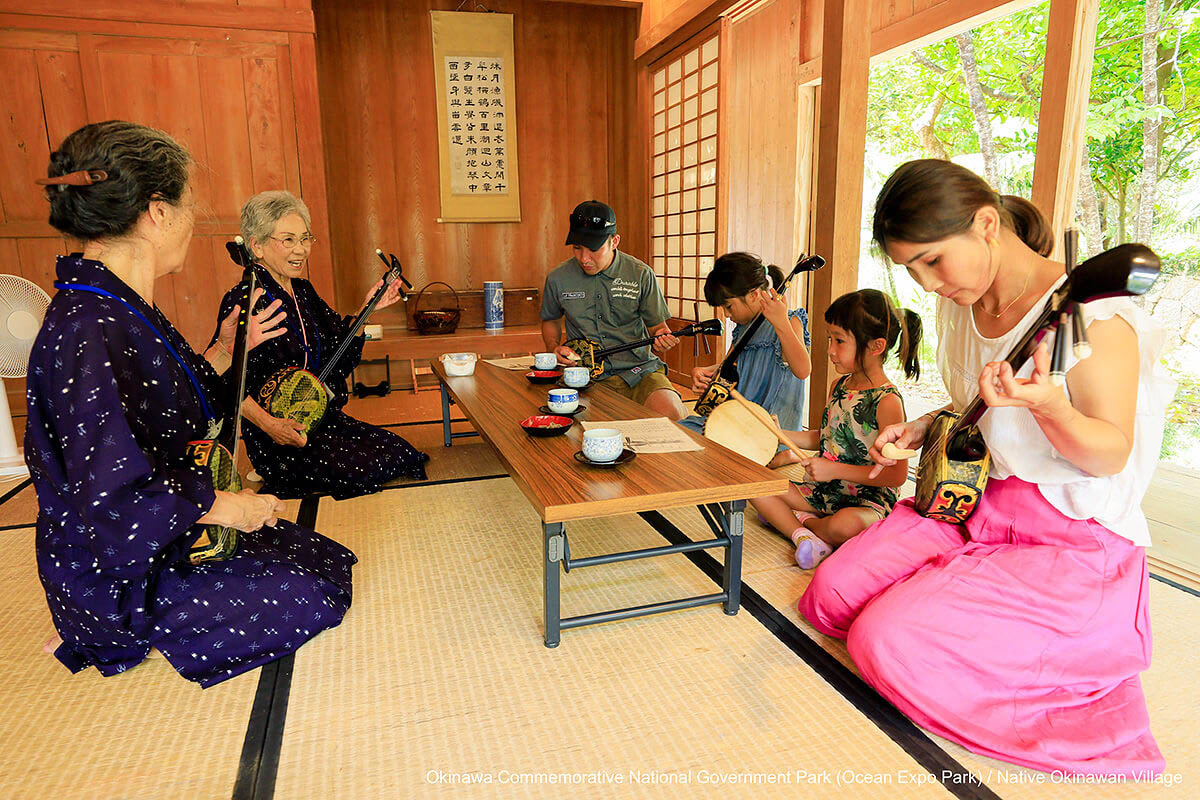 With a history believed to date back about 600 years, the sanshin is a traditional instrument ingrained in the history and culture of the Ryukyu Islands. In the early 17th century, the Ryukyu Kingdom officially adopted the sanshin as a court instrument, used to convey hospitality and at other events. Originally the sanshin could only be played by people of the samurai class, but that changed with social reform in 1879, and the instrument became available to the general public. Eventually, it became widely used in village festivals and performances. Currently, the sanshin is played in a wide variety of music genres, including classical Ryukyu music, Ryukyu opera, folk songs, performing folk arts, and pop music. It has an essential role in the performance of Kumiodori, a registered performing art on the UNESCO Intangible Cultural Heritage of Humanity list. Take this opportunity to get hands-on with an essential part of Okinawan culture and history. 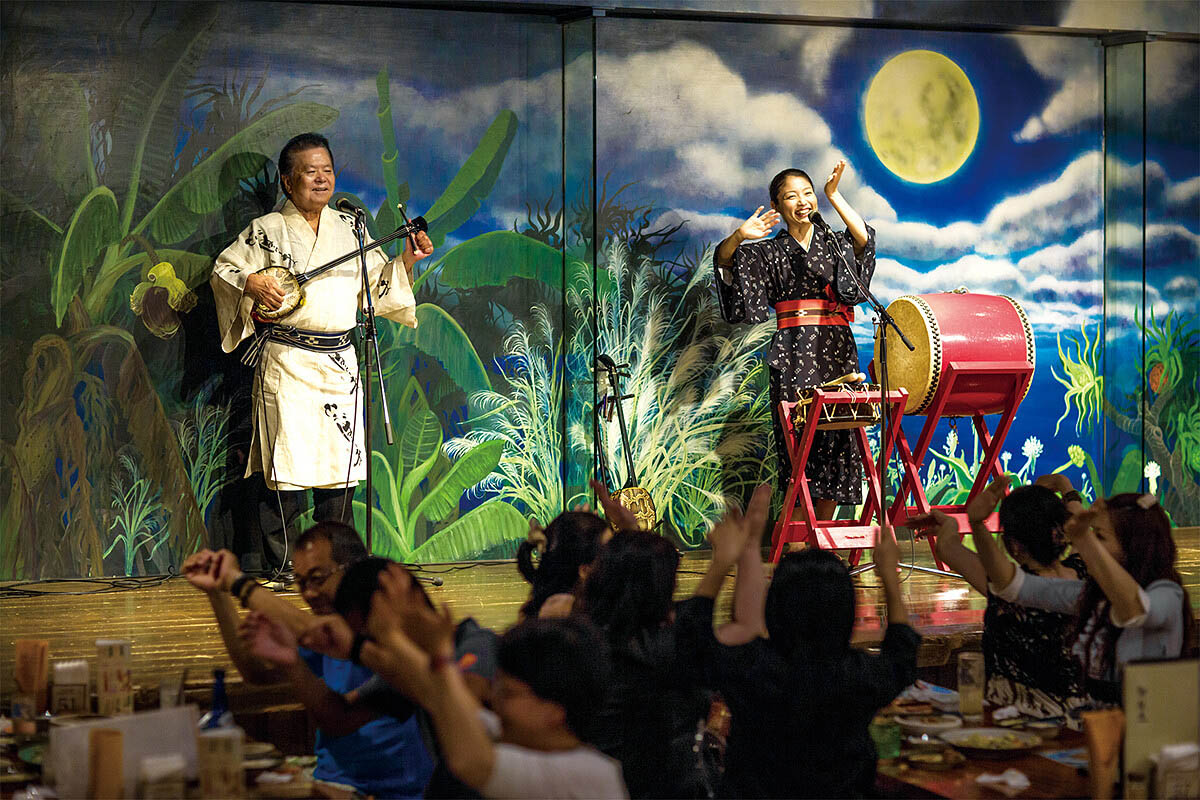 When dancing Kachashi, raise your hands above your head and swing left and right. One of the most popular folk dances in Okinawa, Okinawans break into Kachashi on various occasions, such as wedding celebrations and the end of parties. To be precise, the dancing is called attchamei, and the music that plays at that time is Kachashi. The name of the dance is derived from the word meaning “to stir,” and it is very easy to dance. With both hands above the head, the woman keeps her hand open, and the man just folds his fists, and then they move side-to-side waving their arms as though to stir the sky. Within the prefecture, you can enjoy Kachashi in traditional events and places like festivals, theme parks, and izakaya. The dance is a great way to make new friends. 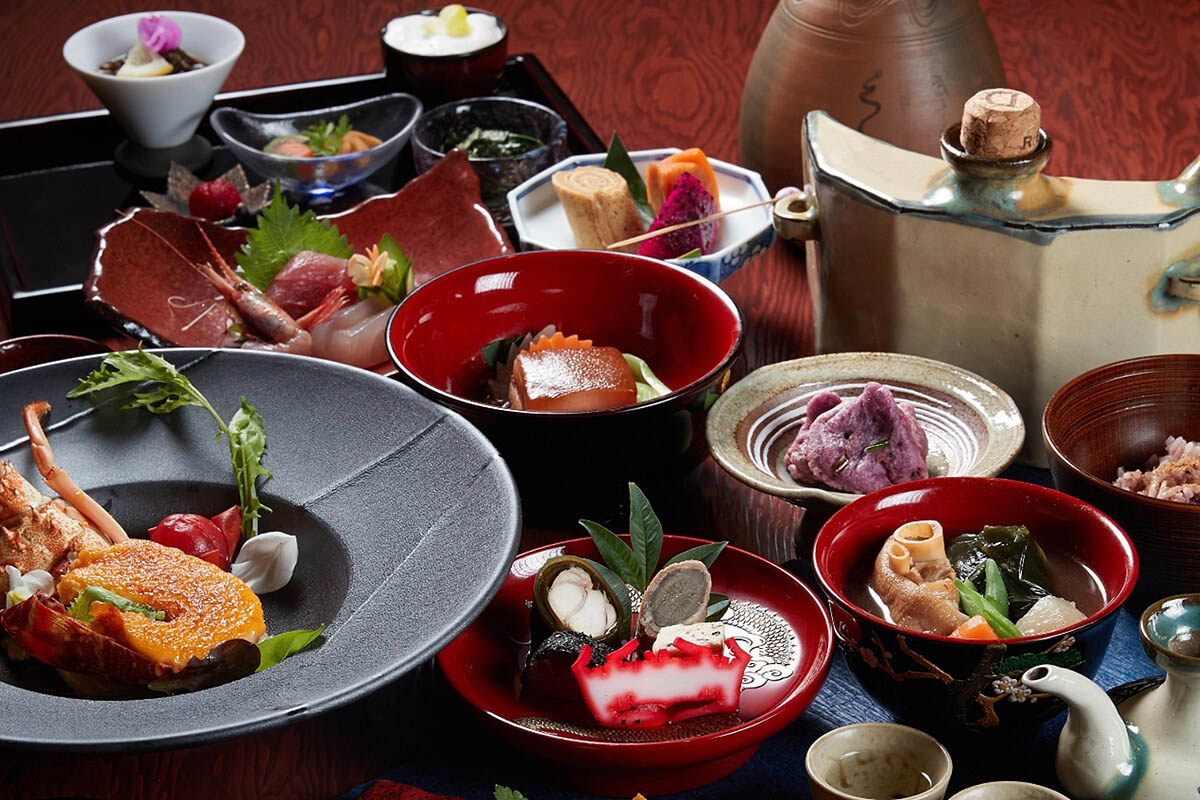 The diplomatic ties to China, Korea, Japan, and parts of Southeast Asia greatly influenced cuisine in the Ryukyu Kingdom. China had a particularly strong influence, and Okinawan cuisine developed with a heavy focus on pork. Ryukyu cuisine can be divided into two broad categories; the food enjoyed by the court, and food enjoyed by common people. Much of the common cuisine was created by wisdom born from poverty, using every part of nutritious ingredients that could be found in abundance. In fact, Okinawa is one of the world’s Blue Zones, an area with many centenarians, and it is thought that the diet contributes to this longevity. In Okinawan, food is referred to as kusuimun and nuchigusui, meaning something like “medicine” or “medicine for life.” Treat yourself to some of life’s medicine, and sample as much as you can. 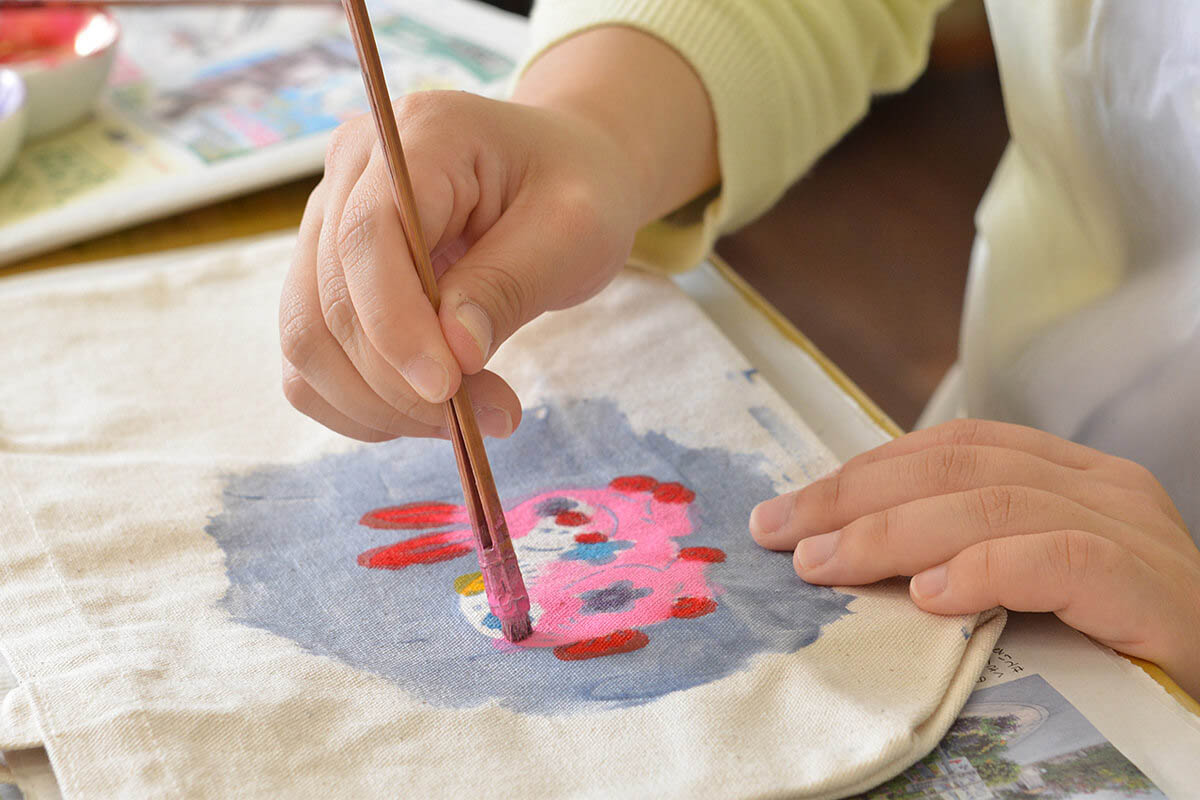 Believed to originate between the 14th and 15th centuries, bingata is a collective term for Okinawan dyeing that emerged in the rich natural climate of the islands, and has been nurtured through unique techniques. During the Ryukyu Kingdom era, when trade with foreign countries flourished, trading goods included Indian calicos, Java calicos, and flower cloths made of Chinese pattern paper. Under the protection of the Ryukyu Royal Government, bingata textiles were used for ceremonial costumes and dresses of the Ryukyu royalty, warriors, and women. Skilled painters and engravers shared sketches and patterns to further enhance the crimson bingata patterns. Royal and noble women often wore the resulting brilliant red-patterned costumes. The vivid colors, bold patterns, and the simplicity of the shapes are part of bingata’s distinctive charm, and many people still love these dyes. Merge your own style with this enduring Okinawan tradition. 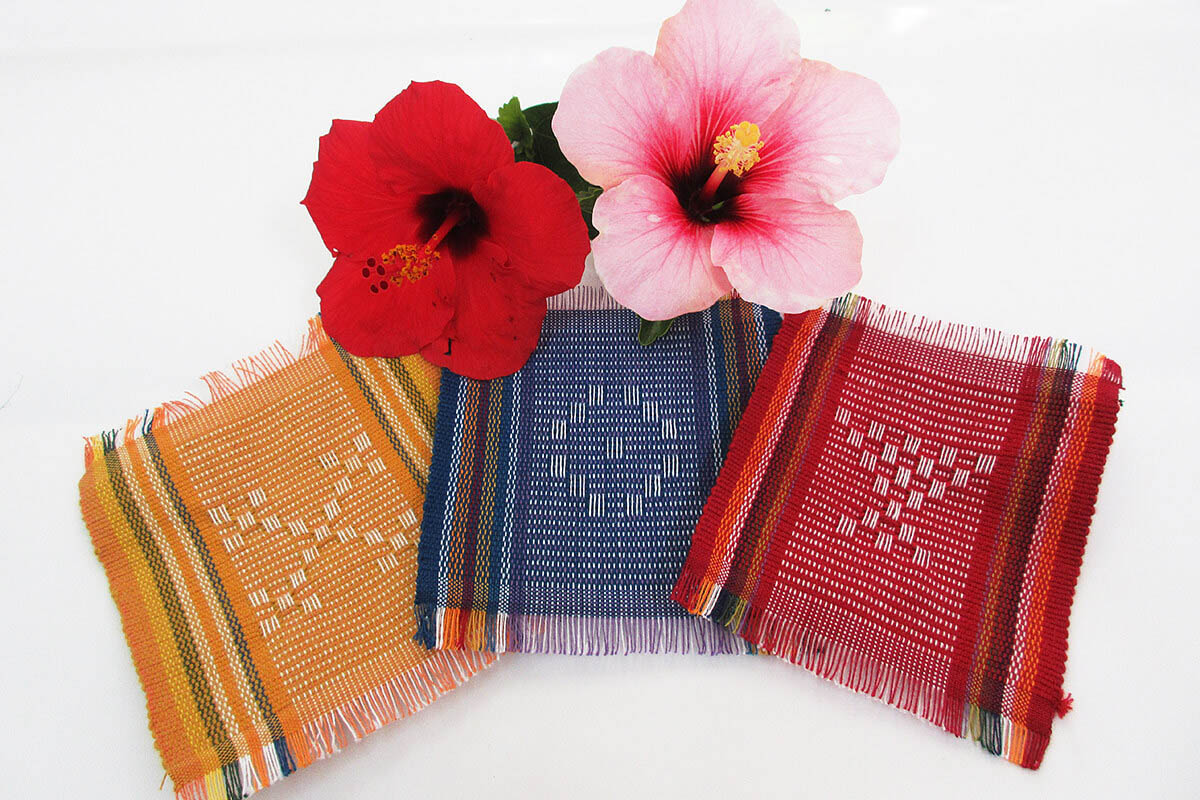 Yuntanza hanaui is a distinctive textile based on the dyeing and weaving techniques adopted from various southeast Asian countries and China during the Ryukyu Kingdom era. However, all knowledge and techniques of making the Yuntanza hanaui gradually faded over time, and were all but forgotten after the Battle of Okinawa (1945). In 1964, a group of passionate women in Yomitan Village working together succeeded in reviving its dyeing and weaving techniques that had been dormant for almost 90 years. It is now certified as Intangible Cultural Property by Okinawa Prefecture, and a Traditional Handicraft by the Ministry of Economy, Trade, and Industry. Experience 600 years of history with Hanaui weaving. 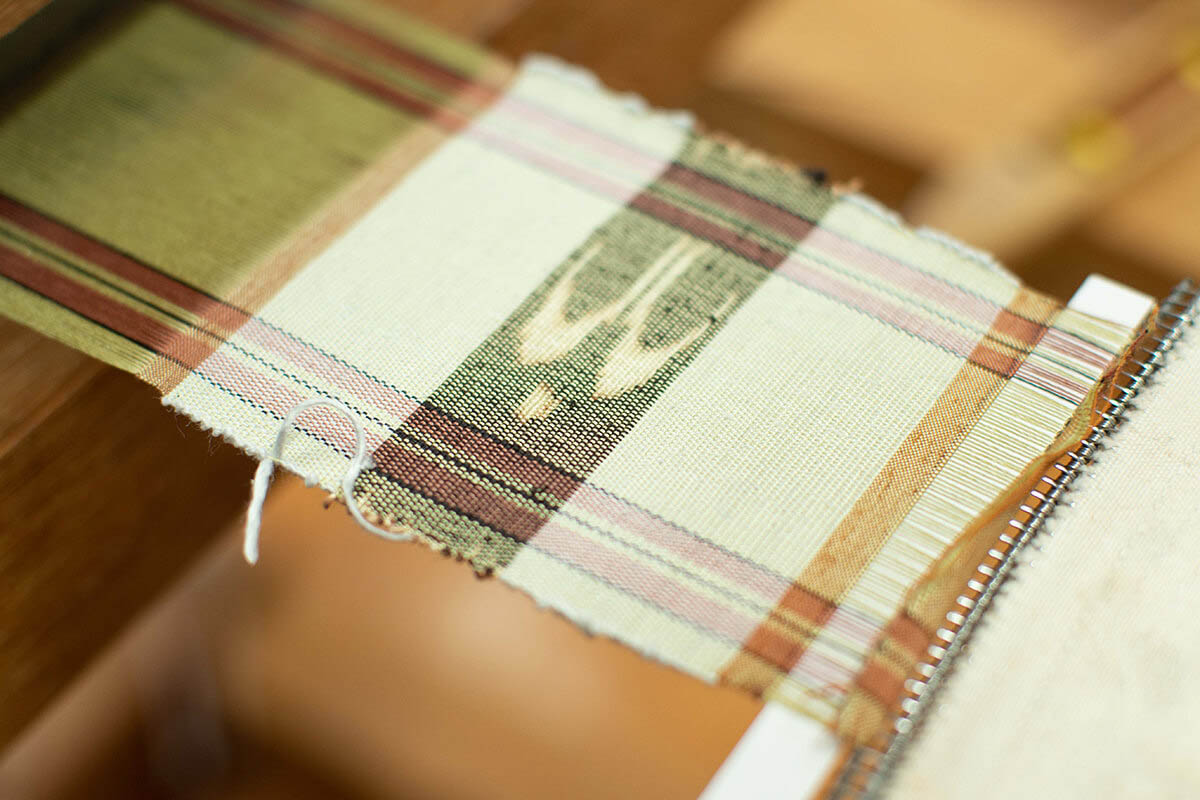 Tsumugi is a contraction of tsumugi-ori, a strong silk fabric. It is a popular and stylish cloth with a dark and deep hue devoid of typical silky luster. Kume Island is said to be the birthplace of tsumugi with a history dating back to the end of the 14th century. According to old scripts, seafarers from China drifted to Kume Island, prompting islanders to go to China and learn sericulture, eventually returning to start tsumugi production. Later, artisans from Japan made great strides in developing the technology further. Make your own tsumugi coaster to take back home with you.

Kumejima Tsumugi no Sato Yuimaru-kan *only in Japanese 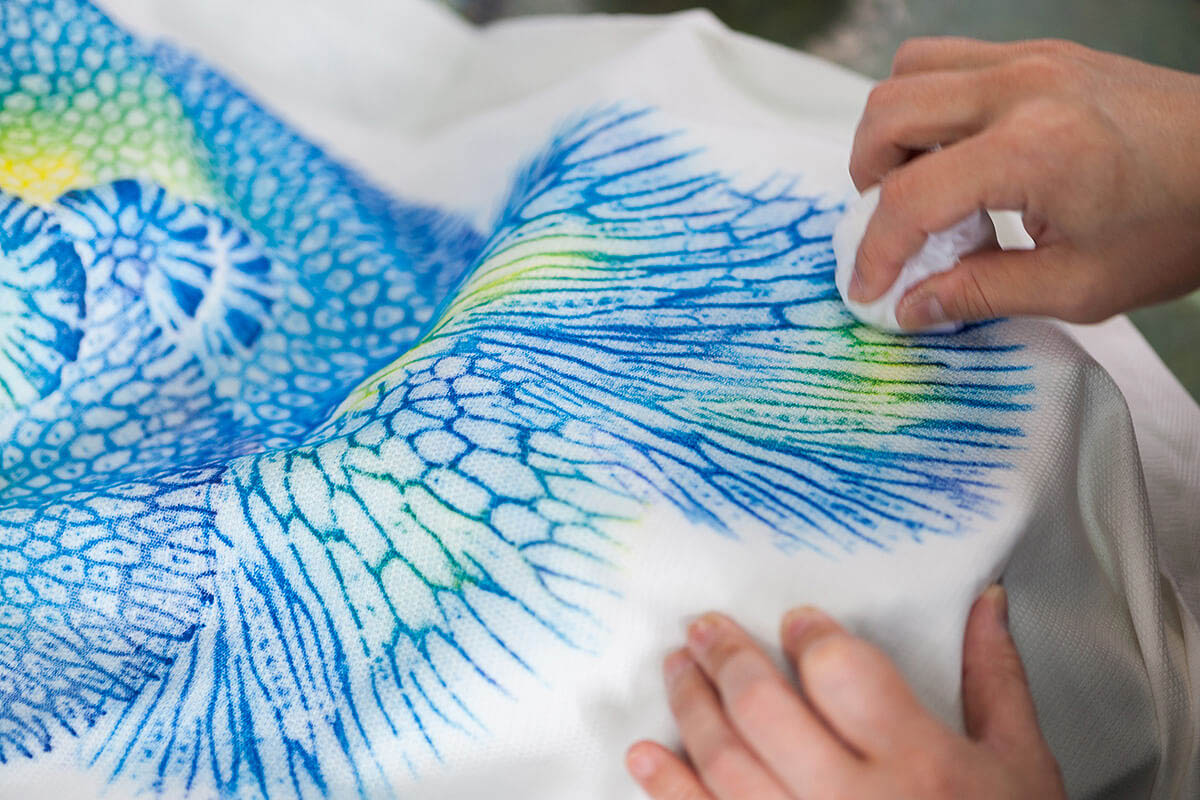 As mentioned before, bingata is a traditional dyeing technique that dates back to the Ryukyu Kingdom era. Shuri Ryusen, a business located in Shuri, in Naha City, is well known for their use of coral dyeing, which evolved independently from the traditional techniques of bingata. Founded in 1973, Ryusen opened the first dyeing plant and laboratory in Okinawa. Its aim is the “revival of bingata and development and transmission of dyeing technologies.” It is also the only place where you can experience coral dyeing. You can combine designs from coral fossils of various sizes and dye clothes using a tool called a tampo with various dyeing liquids, arranging coral patterns to create completely original designs. 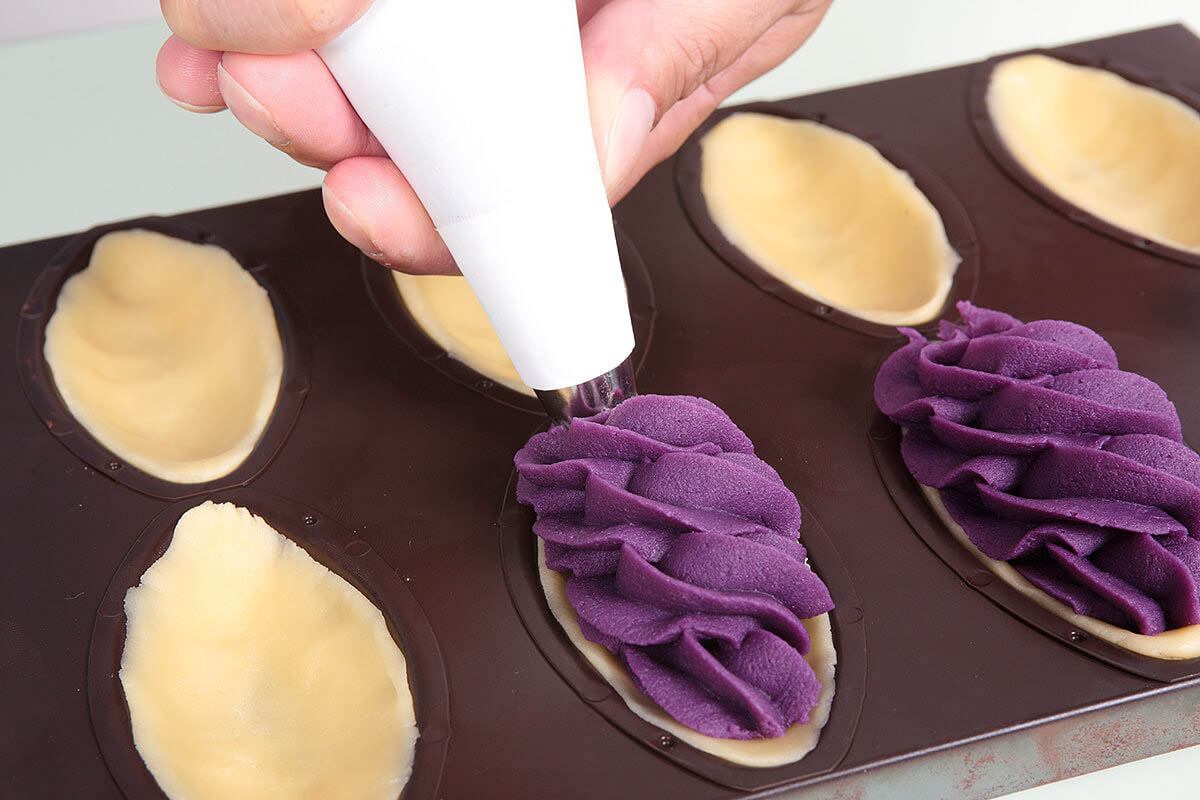 Beni imo is a sweet potato, a traditional Okinawan ingredient. This purple potato is a healthy ingredient that contains anthocyanins and polyphenols, which are said to be excellent antioxidants. It is also rich in dietary fiber and minerals. In the past, umuni (mashed sweet potato confections) was a staple food, but nowadays they are usually eaten steamed or deep-fried. One of the most popular Okinawa souvenirs is the original sweet potato confectionery, and here, you can try to make your own.